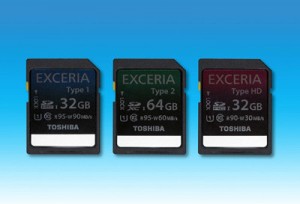 Toshiba will launch high-speed SD memory cards this year in Japan and abroad that can read data at up to 95MB per second and write at 90MB per second.

The Japanese company will launch the cards under a new brand, “Exceria,” which will initially be sold in three different configurations. The fastest type will go on sale in Japan from July, at a cost of US$180 for 32GB of storage. Models with slower write speeds will go on sale from April.

New chip technologies have enabled manufacturers to pack more memory on to storage cards, and digital cameras as well as smartphones are increasingly equipped with hardware to take high-definition video and pictures. As the processors on such devices get faster, the bottleneck for users is becoming the time it takes to save, view and edit the massive data files created.

Memory makers like Toshiba, one of the world’s largest makers of NAND flash memory, are racing to implement advanced technologies and differentiate themselves from the larger market, where competition is driving prices downward. Standard 32GB SD memory cards, with write speeds of at least 10MB per second, can now be found for around US$20.

SanDisk, which partners with Toshiba in research and development as well as manufacturing, already sells its own version of high-speed memory cards on its website. Both companies’ cards are compatible with a high-speed version of the widely used SD memory card standard.

Earlier this year, Sony began selling memory cards with write speeds of 125MB per second that use a different standard. Those cards use a specification called XQD, from the CompactFlash Association, an older rival to formats such as SD.

Toshiba and SanDisk are also racing to pack more memory onto their flash memory chips. In February, Toshiba said it is shipping the world’s smallest 128Gbit memory chip, with an area of 170 square millimeters. The chip uses a 19-nanometer technology process, one step smaller than a 20-nanometer chip announced by Intel and Micron in December.