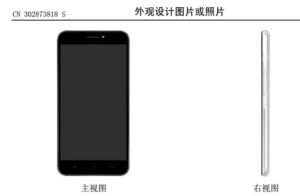 Apple’s iPhone 6 and iPhone 6 Plus face a potential sales ban in China due to a patent dispute with a local company.

The phones infringe a design patent held by Chinese device maker Shenzhen Baili, a Beijing intellectual property office ruled, according to a report.

The office ordered Apple and its partners to halt sales of both products, though Apple has appealed and the phones are currently still on sale there. “We appealed an administrative order from a regional patent tribunal in Beijing last month and as a result the order has been stayed pending review by the Beijing IP Court,” Apple said Friday in a statement.

The iPhone 6 models violate an “exterior design patent” held by Shenzhen Baili. The company was granted the patent in China in July 2014, shortly before Apple released the iPhone 6.

Shenzhen Baili used the patented design to make smartphones under its 100+ brand. The devices start at only CNY 799, or about $120, while the iPhone 6 initially sold for CNY 5,288.

Shenzhen Baili warned Apple in 2014 that it might sue for patent infringement.

It’s not Apple’s first legal challenge in China. In 2012 the company battled a different company there which claimed ownership of the iPad trademark. Apple ended up paying US$60 to resolve that dispute – not a huge sum considering the importance of the Chinese market.

Earlier this year, Chinese regulators shut down Apple’s iTunes Movies and iBooks services without publicly stating why. Those services appear to be still offline.

China is the world’s biggest smartphone market but Apple products face stiff competition there from local handset makers. In the first quarter this year, Apple ranked fifth among smartphone makers in China, according to research firm Canalys.

“‘Local vendors, such as Huawei, Vivo and Oppo, are eating into the premium segment that Samsung and Apple considered their own,” Canalys said at the time.