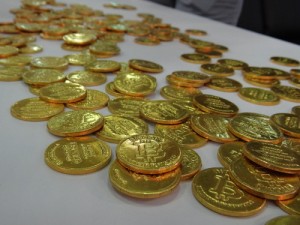 Washington’s biggest problem when it comes to Bitcoin may just be that policymakers on the Hill don’t know enough about it yet.

That was the general consensus of a panel of legal experts speaking Saturday at a Silicon Valley conference devoted to the nascent digital currency.

“Congress is the wild card here,” said Jerry Brito , director of technology policy at the Mercatus Center at George Mason University, who liaisons with Washington on technology issues. But, “I’m very optimistic about the regulatory climate for Bitcoin … because regulators and folks on the Hill simply don’t understand it.”

Use of Bitcoin, a digital currency managed and traded over a peer-to-peer computer network, is growing. It is designed to be a decentralised form of payment not regulated by any financial institution or government body, but still some users worry whether the government might be getting involved, and if so, how.

“They’re trying to fit it into existing buckets, and Bitcoin is very confusing to them. But the potential is there to understand it, to allow it to flourish,” Brito added.

Others agreed. “I’ve gone to D.C. and lobbied and had real mixed feelings about how effective it is,” said Rainey Reitman , who leads the Electronic Frontier Foundation’s activism team. “Most legislators don’t understand it. They don’t have the technology teams available to them.”

Bitcoin’s “flourishing” was a major theme at the conference. More than 50 sessions were held over the course of the three-day event, sporting forward-looking titles such as “Bitcoin in the Future,” “History and Prospects for Alternative Currencies,” and even “The Future of Panhandling.”

The panelists’ remarks came just days after Tokyo-based Mt. Gox, the largest Bitcoin exchange online, was slammed with a seizure order by the Department of Homeland Security, for allegedly failing to comply with U.S. financial regulations.

“What’s missing right now in D.C. is education,” said Brito. His centre later this month is holding a briefing with the Senate Homeland Security and Governmental Affairs Committee on Bitcoin.

To keep the technology safe from political tampering, “we need to have these conversations with lawmakers,” said EFF’s Reitman.

The Bitcoin Foundation, which provides the bulk of the core backend development for the currency, is already active on this front, and has plans to hire a Washington lawyer this year who can engage with politicians and try to facilitate a regulatory environment in which the currency can thrive.

There is some legislation on the table that could have an impact on Bitcoin in the months and years ahead, panelists said.

One law, for instance, is the outdated Electronic Communications and Privacy Act, which in a new form introduced by Senators Patrick Leahy and Mike Lee seeks to ensure a warrant protection for all private online messages. The law was originally passed in 1986 to allow the Department of Justice to access private communications with only a subpoena. What happens with that law could have an effect on services like Gliph.

Congressional action notwithstanding, another issue deals with financial censorship, when online payment services shut down users’ accounts due to political or controversial speech made by the account holder.

As Bitcoin becomes more organised, “where are the points of potential censorship?” Reitman asked. “Where do we put in protections now to ensure one weak link does not affect the rest of the Bitcoin community?”

Using the Mt. Gox case as an example, some question whether technology companies should work harder to prepare for, or even shield themselves from, government data requests, such as by crafting more robust user privacy policies or encrypting their user data more strongly.

“This idea to design a system that’s ‘unsubpoen-able,’ I think that’s a hot legal question,” said Joseph Cutler , an attorney with Perkins Coie.