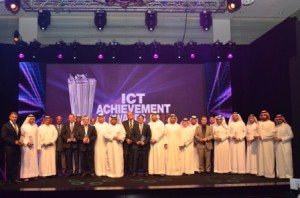 The third annual CNME ICT Achievement Awards were held last night to honour the achievements of the major players from industry within the Middle East.

The ceremony, held at Jumeirah Emirates Towers, capped off the opening day of GITEX, as end-users and industry vendors gathered to commemorate the year’s best performers in a number of categories.

In the end-user category, Ahmed Ebrahim Al Ahmad scooped the prestigious CIO of the Year award following a successful first term with Nakheel, whilst aeCert gained the sought after title of IT Team of the Year.

Future CIO of the year Award went to Alok Srivastava of Masdar and CNME granted the University of Sharjah the Editor’s Choice award.

Over 280 nominations were received during a robust and busy year for the ICT sector.