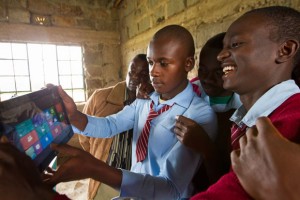 Microsoft has announced that it is collaborating with the Kenyan government and a local Internet service provider to provide broadband access using TV white spaces and solar-powered base stations.

The move comes as part of a long-term strategy to spread mobile telephony and Internet connectivity in Africa.

The company is also launching a smartphone for the African market with Huawei, and plans to launch more smart devices as time goes on.

The plans are part of the Microsoft 4Afrika Initiative, which aims by 2016 to have tens of millions of smart devices in the hands of African youth. Microsoft also aims to bring 1 million African small and medium-size enterprises (SMEs) online, train 100,000 members of Africa’s existing workforce, and help an additional 100,000 recent graduates develop skills to improve their employability, 75 percent of whom Microsoft will help place in jobs, the company said.

“When we look at the world, many see China or the BRIC [Brazil, Russia, India, China] countries as the next big opportunity for growth. At Microsoft, we view the African continent as a game-changer in the global economy,” wrote Ali Faramawy, Corporate Vice President, Microsoft Middle East and Africa, in a blog post on Monday.

Microsoft is introducing in seven African countries a mobile phone from Huawei called the Huawei 4Afrika, described as a full-function Windows Phone 8 smartphone, which will come preloaded with select applications designed for Africa. The phone will be available later in this quarter in Egypt, Nigeria, Kenya, Ivory Coast, Angola, Morocco and South Africa, the Chinese company said.

Huawei already has a strong presence in Africa, and has worked with more than 18 African governments to build e-Government networks in countries such as Nigeria, Kenya, Uganda, Senegal, Angola, Guinea, and Djibouti, the company said.

Microsoft said it plans to launch a series of smart 4Afrika devices, though according to reports, these could come from other vendors. Another part of the 4Afrika initiative, for example, is a joint Nokia and Microsoft customer training program in Kenya and Nigeria to help accelerate the adoption of Nokia Lumia 510 and 620 phones.

GSMA said in November that sub-Saharan Africa is the fastest-growing mobile market in the world, with an average annual growth rate of 44 percent since 2000. Mobile connections have increased to 475 million, compared to 12.3 million fixed line connections, the association said.

Microsoft is hiring 30 paid student interns to staff an AppFactory to which the public can submit requests for Africa-relevant Windows applications.

The company is also setting up by April a SME Online Hub in Morocco and South Africa that will provide free products and services from Microsoft and partners that can help SMEs expand their business locally and outside their immediate geography, and get more competitive.

“We’re also planning to provide free domain registration for one year for those qualifying SMEs who want to create a professional website,” Faramawy said.

The broadband pilot in unserved locations near Nanyuki and Kalema in Kenya will use TV white spaces, the unused portions of wireless spectrum in the frequency bands generally used for television, Microsoft said.

Radio signals in the TV bands travel over longer distances and penetrate more obstacles than other types of radio signals, and will require fewer of the solar-powered base stations that the company plans to deploy to provide coverage.

The focus of the project goes beyond testing the technical feasibility of using TV white space technology, toward focusing instead on increasing economic opportunities in communities without access to broadband or electricity, Microsoft said. The initial installation near Nanyuki brings access to a healthcare clinic, a primary school, two secondary schools and a community centre.

Microsoft has been operating in Africa for 20 years, and has offices in 14 countries. It did not disclose the size of the investment it plans in Africa for the new initiative.