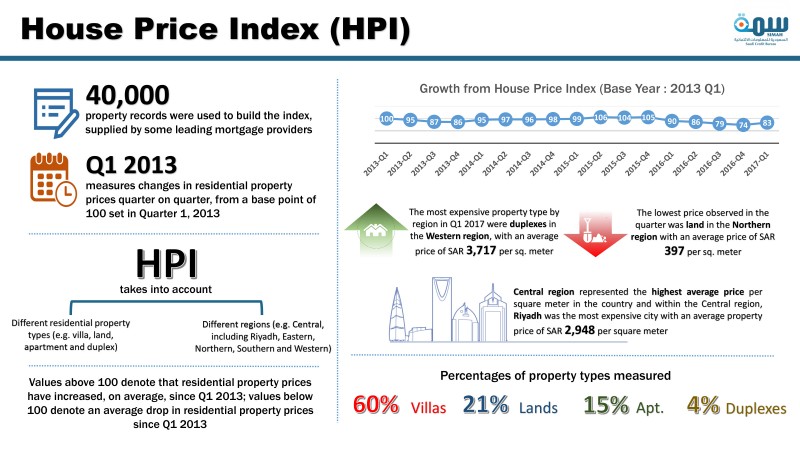 In the HPI, villas comprised 60% of the property types measured, followed by land at 21%, apartments at 15% and duplexes at 4%.

Commenting on the HPI results, SIMAH’s CEO,  Nabil Al Mubarak said: “SIMAH is delighted to launch the Saudi House Price Index, which has been developed using a robust sample of high quality residential property data and utilising international best practice statistical methodologies for the development of such indices. We believe that this index, which SIMAH will publish each quarter, will quickly become an important and leading economic indicator for policy makers, banks and mortgage lenders and consumers across the country.

The upwards movement in residential property prices across the Kingdom in Q1 2017 reflects what we have observed in terms of mortgage activity and which is described in the SIMAH Mortgage Credit Index, which we also recently published. The upwards trend in average residential prices, couple with the increase in mortgage enquiries and new loans written, reflects that consumers are starting to actively invest in property once again after a slow and difficult market in 2016. The relaxation of maximum loan to value criteria set by SAMA from 70% to 85% has also had a positive bearing in terms of average residential property values.”