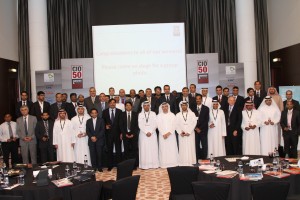 A selection of CIOs were honoured as the top 50 in the region today at CNME’s annual CIO 50 Awards and Forum event at The Address Hotel, Marina, in Dubai.

The award ceremony recognises the head decision maker of 50 organisations who have shown innovation, intelligence and intuition over the past 12 months.

The main themes addressed by each speaker were the consumerisation of IT and its effect as a business enabler, the challenge of mobility and BYOD and IT expenditure.

“The big five IT trends of the next half decade are mobile, social, cloud, consumerisation, and big data,” said Tesfai.

“Today, IT faces many challenges, but each challenge is an opportunity to innovate,” said Almazrooei.

As well as presentations and the awarding ceremony, CNME also announced the launch of the new CIO Council, an exclusive online platform for the region’s CIOs to connect and collaborate on IT challenges, and CPI Analytics, CPI’s new research venture which will target local resources to gain vital local data for the area, something currently unavailable in the Middle East.

“I’ve been in some pretty big jobs, and all these survey results come out, but I don’t know where from, they’ve never asked me,” joked Tewary, during his presentation.

Albakri delivered a case study on the King Abdullah Economic City currently under construction in the Kingdom of Saudi Arabia.

Following the presentations, the awards were handed out to the winners, they were as follows: