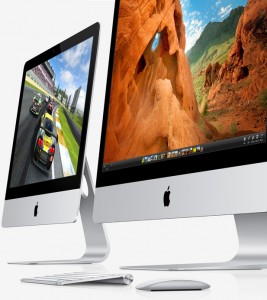 Sales of Apple’s iMac, the computer often credited with saving the company, have peaked and by the end of 2014 will account for approximately 2% of the firm’s revenues, analysts now predict.

The iMac, an all-in-one computer with roots in the original 1984 Macintosh, was introduced in 1998 as a gumdrop-shaped machine sporting a CRT (cathode ray tube) display. Its hallmarks were an AWOL floppy drive — the first Mac to dump the then-standard component — and translucent plastic cases that came in a bevy of eye-squinting colors. Six years later, Apple reshaped the machine to fit the logic board, drives and other components behind an LCD screen, a form it still retains.

Apple’s return to computer industry significance is often traced to the original iMac, the first system introduced by then-interim CEO Steve Jobs after his return to the firm he had co-founded two decades earlier.

But even with that pedigree, the iMac has long been outpaced by Apple’s laptops. In the last four quarters, for example, Apple’s laptops outsold desktops by nearly three to one, with a similar revenue disparity.

Poor desktop sales were caused in part by the long stretch between product refreshes: Apple revamped the line in May 2011, then waited until late October 2012 to release the next update, an interval 72% longer than average. But the iMac immediately stumbled, as the new models did not go on sale until Nov. 30 because of supply issues.
Those supply issues will have a dramatic impact on iMac sales this quarter and next, according to a pair of Wall Street analysts who model future quarters.

Brian White, of Topeka Capital Markets, for instance, forecasts that desktop sales this quarter will be just over one million machines, or 31% fewer than during the same quarter last year. Nearly all of Apple’s desktop sales are iMacs; the other two desktop lines, the Mac Mini and Mac Pro, sell in comparatively tiny volumes.

Meanwhile, Brian Marshall, of ISI, predicted equally bad news, saying that desktop sales will be down 29% this quarter.

Clearly, the lack of available iMacs in the fourth quarter, traditionally the best for desktop sales, has eliminated the usual “pop” from the holidays and a recent refresh.

And things are not going to get better.

Marshall’s take is the same: In the first quarter of 2013, desktop sales will be down 20%, and sales during the calendar year will be off 14%.

By the end of 2013, each analyst estimates, Apple’s laptops will outsell its desktops by four to one.

Naturally, revenue follows. Desktops will contribute just 2.5% of Apple’s total this quarter, 2.7% in the 2013 fiscal year, and 2.4% the year after that, according to White. That’s down significantly from 2010, when desktops accounted for 9.5% of all Apple revenue, and even off fiscal 2012, when sales were 3.9% of total revenue.

Charting White’s and Marshall’s estimates show that after the fourth-quarter 2011 peak of 1.5 million, Apple’s desktop line-up will essentially flatten at an average of under one million per quarter for the next two years.

Meanwhile, Apple notebook sales are forecast to increase by 11% this quarter, and post double-digit gains in 2013 and 2014. In other words, sans MacBooks, Apple would essentially be out of the computer business.

Mac sales have been hammered by some of the same blows that have landed on the much larger Windows PC industry, including tough economic times for consumers and a shift toward tablets. Even Apple has been affected by what its executives like to call the “post-PC world.”

Example One: It’s likely that the iPad Mini, Apple’s diminutive tablet that went on sale five weeks ago, will sell more units this quarter than all Macs combined.

Example Two: The Mac has been the weak sister of Apple revenue since the fourth quarter of 2009, when the iPhone passed it by. In 2012’s third quarter, the most recently-reported by Apple, the Mac accounted for just 18% of all company sales, behind both the iPhone (with 48%) and the iPad (21%). By the end of fiscal year 2013, the Mac’s share will have dropped to 14%, White estimates, as the iPhone again hits 50% and the iPad climbs to 25%.

With so little impact on the ledger book, it’s no surprise that Apple didn’t come through this fall with one item on many wish lists: a high-resolution, “Retina” screen. That addition would probably have pushed up iMac prices even more than the extra $100 Apple slapped on the new machines.

But Apple seems determined to keep desktops in its portfolio. The new iMacs featured the company’s first deployment of “Fusion Drive,” an option that combines flash storage with a standard hard drive to boost startup, application launches and file copying chores. And the company redesigned the case to make it thinner, a move that left the smaller 21.5.-in. iMac practically impossible to upgrade after purchase.

Analysts have maintained that desktops, Apple’s included, still have a market, primarily as the shared computer in homes where each family member has a more mobile device, like a notebook or tablet.

Windows PC sales bear that out. According to the NPD Group, between 20% and 30% of early Windows 8 systems have been of all-in-one machines, many of them very similar in appearance to the iMac.

Steven Baker, of NPD, noted that in the Windows market, “desktops have done better all year” in terms of sales gains, or if they’ve slipped, they’ve done so by lower margins than PC notebooks.

Baker was optimistic about Windows desktops’ chances, in part because OEMs are starting to equip them with touch-sensitive screens, something Apple has refused to do on any of its Macs. “All-in-one [desktops] make great touch devices,” Baker argued in an interview two weeks ago.

“Touch surfaces don’t want to be vertical,” Jobs said then. “It gives great demo but after a short period of time, you start to fatigue and after an extended period of time, your arm wants to fall off. It doesn’t work…. It’s ergonomically terrible.”