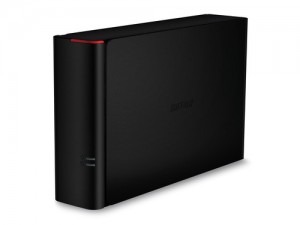 Buffalo Technology has set the end of February as the launch date for its DriveStation DDR external hard disk enclosure, which uses a 1GB DRAM cache to achieve what, Buffalo says, is the world’s fastest transfer speed.

The company said the newest addition to its DriveStation line-up can hit speeds of over 408MB per second over its USB 3.0 connection, fast enough to copy a thousand 800KB images in 3.5 seconds from a high-end Windows 8 computer.

The drive can quickly store data in its 1GB DRAM cache before writing it more slowly to the hard disk. While some external and internal drives use a NAND flash cache to increase performance, pricier DRAM caches provide faster access. One downside, though, is that if a RAM cache loses power before the data is copied to disk, then the data is lost too.

To achieve its record speed, Buffalo also used its backup software, which it says more than doubles USB 3.0 transfer speeds on Windows machines. A Mac version increases speeds by 60 percent and can copy the thousand images in about 4.1 seconds. The company did not state the drive’s performance when copying more data than would fit in its cache in one go.

The new drive enclosure is to go on sale in Japan at the end of February in 3TB, 2TB and 1TB versions, with the largest costing ¥26,565 ($300), over 50 percent more than the company expected it to sell for when it unveiled it at the CES show in January. Customers elsewhere will have to wait much longer for their data to transfer, though: Buffalo has still not fixed details of pricing and availability outside Japan.

The company said it achieved the high transfer speeds using a computer running Windows 8 with an Intel Core i7 processor, 4GB of RAM, a USB 3.0 port and an internal SSD hard disk. The product will work with older versions of Windows at lower speeds, and also supports the older USB 2.0 specification.

The new product also includes features from other Buffalo drives, including encryption software and a power-saving mode.

The drive measures 45 millimetres wide, 202mm long and 126mm tall, has a single USB3.0 connection and comes with an external power adaptor.