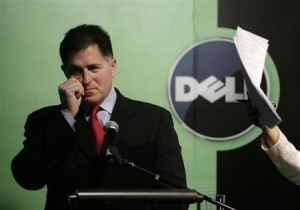 Questions are being raised about the terms of Dell’s $24.4 billion buyout deal, as the number of shareholders voicing opposition to the plan appears to be growing.

Dell is now increasingly on the defensive.

This is not good news for the company, the world’s number-three PC maker in terms of shipments, which is betting that as a private company able to operate outside of the intense scrutiny of Wall Street, it will be better able to execute its strategy to push into high-margin products and services.

Heightening the pressure on Dell, shares in the company were trading at $13.79 Friday afternoon, higher than the $13.65-per-share offer from Michael Dell and his buyout partners. The trading indicates that at least some market players are betting that the company will have to raise its offer.

After weeks of intensifying rumours, Dell announced on February 5 that Michael Dell is teaming up with investment firm Silver Lake to buy the company. The deal is being financed through cash and equity contributed by Dell, cash from investors affiliated with Silver Lake, cash from MSD Capital, L.P., a $2 billion loan from Microsoft, rollover of existing debt and debt financing from BofA Merrill Lynch, Barclays, Credit Suisse and RBC Capital Markets. Dell stressed that it was putting a 25 percent premium on shares over Dell’s closing price on January 11, when rumours of a deal first appeared in news stories.

In the face of announcements from several large shareholders opposing the deal, Dell this week issued filings with the U.S. Securities and Exchange Commission that highlight details about how the deal came about. In a filing Thursday, the company said that Michael Dell first approached the company’s board of directors with the idea to go private in August last year. A special committee was formed to consider the proposal as well as other ideas to shore up the company’s business.

Various plans were considered as the company’s business continued to decline. In the third quarter, revenue decreased 11 percent year over year to $13.7 billion, while earnings per share amounted to $0.27, down 45 percent, as desktop and mobility product sales sagged.

The filing also reveals that Michael Dell agreed to lower the value of his own shares to get the deal done.

“Mr. Dell and related persons agreed that their shares to be rolled over in the proposed transaction would be valued only at $13.36 per share as opposed to the $13.65 price offered to the Company’s unaffiliated stockholders,” according to the filing.

Some shareholders are playing tough. Donald Yacktman, president of Yacktman Asset Management, which owns 15 million shares of Dell, said in an interview with Bloomberg TV this week that the chances of the deal going through at its current valuation “are close to zero.”

For the buyout plan to go through, it needs to be approved by 50 percent of shareholders not including Michael Dell. This amounts to investors holding a total of 43 percent of the company. Southeastern Asset Management, the largest independent shareholder outside of Michael Dell, has blasted the buyout offer.

“We are writing to express our extreme disappointment regarding the proposed go-private transaction, which we believe grossly undervalues the Company,” Southeastern said in a statement to Dell made public last Friday. “We retain and intend to avail ourselves of all options at our disposal to oppose the proposed transaction, including but not limited to a proxy fight, litigation claims and any available Delaware statutory appraisal rights.”

Southeastern, which owns 8.5 percent of Dell, said it values the company at $24 a share.

On Tuesday this week, T. Rowe Price, which owned 4.4 percent of Dell shares as of September and is the second-largest independent shareholder in the company, also came out against the deal. Another shareholder announcing that it would oppose the deal is Pzena Investment Management. Altogether, shareholders announcing opposition to the deal represent at least 15 percent of the company shares. That’s far short of the 43 percent needed for the deal to go through, but taking into account Southeastern’s stance, at least some opposing shareholders appear willing to bring lawsuits against the company if the shareholder vote does not go their way.

As part of the deal, Dell has said it has set aside a 45-day “go-shop” period, in which it will consider other offers for the company. However, when Hewlett-Packard was shopping around its PC business in 2011, it reportedly could not get a taker for the unit — the largest PC maker in the world — which was being valued at $8 billion.

After the go-shop period the company will send out a proxy statement, and a shareholder vote is expected to be held in June or July.

It is widely doubted that Silver Lake will come up with a much higher offer than what is already on the table. Every cent that the offer is raised puts more pressure on the buyout team to return the investment in kind, and Michael Dell’s agreement to lower the value of his shares suggests that tough negotiations went into the current offer.

In a research note, Raymond James analyst Brian Alexander said that he does not expect the current buyout price of $13.65 to increase significantly. He stated that he believed the offer “will be sweetened, through a combination of higher offer price and/or special dividend, we highly doubt the ultimate price exceeds $15.”

That may not appease some shareholders, considering Southeastern’s valuation. Michael Dell may have to take to the road over the next few weeks to lay out even more details about how the buyout team valued the company. Meanwhile, the Dell earnings statement and conference call next Tuesday will be widely scrutinised.