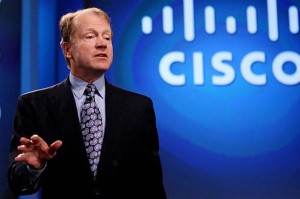 Cisco posted lower sales and profit in the third quarter but beat its own forecast, signalling that the company is continuing to work against economic and industry challenges following two earlier weak performances.

The dominant networking company posted revenue of US$11.5 billion for the quarter ended 26th April, down 5.5 percent from a year earlier. It had predicted revenue would fall by at least 6 percent.

Net income fell by 3.2 percent to $2.6 billion, with earnings per share dropping to $0.42. Not including one-time items, Cisco posted earnings of $0.51 per share. That result beat the consensus forecast of analysts surveyed by Thomson Reuters.

For the fourth quarter, the company expects its revenue shortfall to ease, with revenue down between 1 percent and 3 percent. But it will probably take several more quarters for steady growth to return, Chairman and CEO John Chambers said on a conference call.

“Our clear goal is to return to growth. It won’t be straight up and to the right,” he said. “It probably will be a little bit bumpy.”

Sales to U.S. enterprises were a strong point in the quarter, Chambers said. However, sales in developing countries continue to be weak and Cisco expects challenges in those countries to continue, he said.

Cisco’s woes continued in some of the biggest emerging economies, with product orders down 28 percent in Russia and down 27 percent in Brazil. Orders in China fell 8 percent. As before, Cisco cited economic uncertainty. European markets, while still fragile, showed signs of recovery, Chambers said.

Cisco is trying to build more of its business around software, including SDN (software-defined networking), and made progress on those fronts in the quarter, Chambers said. The company signed a broad agreement with General Motors under which the carmaker will license all of Cisco’s software and be able to use it in a variety of ways.

SDN, often cited as a threat to Cisco’s sales and profit margins, is benefiting the company through its own version of the technology, called ACI (Application-Centric Infrastructure), said Rob Lloyd, President, Development and Sales, Cisco. Cisco has about 175 customers for its Nexus 9000, which is capable of using ACI, he said. ACI is in testing now and set for commercial availability in the next few months, and two public cloud providers plan to use the system, Lloyd said.

Cisco also made strides toward basing its business more on software licenses that bring in ongoing revenue, Chambers said. The General Motors deal could include the fundamental IOS (Internetworking Operating System) as well as security, collaboration and other components. Cisco wants to sell customers a complete architecture including software, infrastructure, applications and services, and save them the cost and effort of integrating the parts, Chambers said.