According to Uber, as part of this partnership, it will supply its proprietary self-driving system to Toyota Sienna Minivans. Rather than owning and operating the fleet of self-driving vehicles, these minivans will be owned and operated by an agreed upon third party, a new business model for Uber.

The expanded partnership with Toyota signals the company’s commitment to deploying self-driving technology at scale for our riders around the globe, Uber said. “We look forward to making progress in the years ahead with another strong parter by our side.”

The investment values Uber at $76 billion, a step up from the $72 billion valuation Uber received in a deal with Alphabet Inc self-driving unit Waymo this year.

Uber will combine its autonomous driving system with Toyota’s Guardian technology, which offers automated safety features such as lane-keeping but does not enable a vehicle to drive completely autonomously.

“This agreement and investment marks an important milestone in our transformation to a mobility company as we help provide a path for safe and secure expansion of mobility services like ride-sharing that includes Toyota vehicles and technologies.”

“The deal is the first of its kind for Uber, and signals our commitment to bringing world-class technologies to the Uber network,” said Dara Khosrowshahi, Uber’s CEO.

“Our goal is to deploy the world’s safest self-driving cars on the Uber network, and this agreement is another significant step towards making that a reality. Uber’s advanced technology and Toyota’s commitment to safety and its renowned manufacturing prowess make this partnership a natural fit. I look forward to seeing what our teams accomplish together.”

Most Read in Editor's Picks 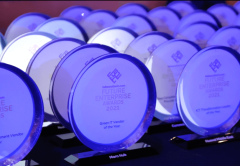 IT Pioneers celebrated at the Future Enterprise Awards 2021