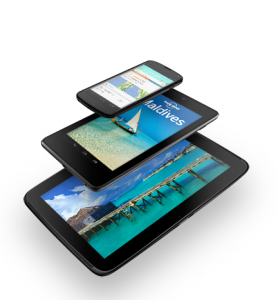 Google was expected to showcase the devices in New York City, but cancelled a planned Android event because of Hurricane Sandy.

The Nexus 10 tablet and Nexus 4 smartphone will join Google’s growing stable of hardware devices, which include the Nexus 7 tablet and existing Nexus smartphones.

The Nexus 10 can display images at a 2560-by-1600 pixel resolution, which Google claimed is the “highest resolution tablet on the planet,” the company said in a blog entry. Apple’s recently announced iPad with a 9.7-inch screen has a resolution of 2048 by 1536 pixels.

The Nexus 4 smartphone was made with LG, Google said. The smartphone has many new features with Android 4.2, including wireless charging and a new keyboard to make typing easier. Android 4.2 also has a new feature called “Photo Sphere” to create 360-degree images and supports a wireless multimedia streaming standard called Miracast, which allows users to wirelessly stream movies directly to high-definition TVs.

The smartphone does not have LTE capabilities, according to the specification page for the product. It has a quad-core Qualcomm Snapdragon S4 Pro processor, a 1280-by-768 pixel resolution screen, NFC, Bluetooth, an 8-megapixel rear camera and a 1.3-megapixel front camera. It weighs 139 grams.

An unlocked Nexus 4 will be available for $299 with 8GB storage and $349 with 16GB storage through the Google Play store in the U.S., U.K., Australia, France, Germany, Spain and Canada. A 16GB model will also be available through T-Mobile for $199 with a two-year contract. Google will make the smartphones available on Nov. 13, and T-Mobile it will sell the Nexus 4 smartphone on Nov. 14. T-Mobile is not yet offering LTE in the U.S. yet.

Google also upgraded its popular Nexus 7 tablet, which has a 7-inch screen and a quad-core processor. The company has added a Nexus 7 with 32GB for $249, and reduced the price of its 16GB model to $199. Google will also sell a $299 model with 32GB storage and HSPA+ mobile broadband capabilities, which will be unlocked and work with multiple carriers worldwide including AT&T and T-Mobile in the U.S.

The tablet war has intensified in the last few weeks. Apple will ship the new 9.7-inch iPad (starting at $499) and 7.9-inch iPad Mini (starting at $329) later this week and Amazon is expected to ship new Kindle Fires starting at $199 later this month. Microsoft is now shipping the Surface tablet ($499) with a 10.6-inch screen and Windows RT, with other vendors like Asus and Lenovo also shipping Windows tablets.

Google also said it would bring its Google Play store to Europe on Nov. 13. to audiences in the U.K, France, Germany, Italy and Spain.