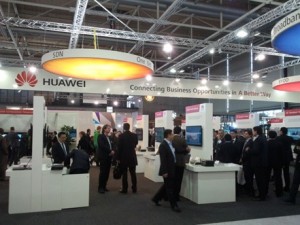 Huawei’s enterprise division is ramping up its European presence, following an announcement last week that SAP has certified the company’s servers to run its HANA in-memory platform.

Such deals with SAP and other big software vendors will be key for Huawei to succeed in the enterprise.

This week’s CeBit trade show illustrated how serious the Chinese vendor is about making its mark in the enterprise sector. Buses ferrying people between the halls were plastered with the company’s ads, and its 900-square-metre stand was filled with servers, storage and networking equipment.

But big news from Hanover was that SAP has certified Huawei’s Tecal RH5885 V2 server for use as a HANA appliance. HANA stores information to be processed in-memory, instead of moving it on and off of disks, which speeds up performance, according to SAP.

The direct benefit is that Huawei can now sell systems in an important growth area of the market, according to Gartner research director Adrian O’Connell. There are also indirect benefits in terms of raising the profile of Huawei as a server vendor, both for users and other technology partners, increasing the credibility of the technology capabilities of its offerings, he said via email.

Huawei accounted for around five percent of server volumes in Asia Pacific during the last three months of 2012, but its share in Europe, the Middle East and Africa was less than one percent, according to Gartner’s data.

Growing that to meaningful volumes won’t be easy. The server market in Europe is very mature and highly consolidated, with the top three vendors accounting for nearly 75 percent of volumes, according to O’Connell.

“New vendors not only have to contend with the challenges of setting up a business operation across the geography and then scaling it, but also convince users that they provide a better option than vendors that they’ve been working with for a long time,” O’Connell said.

To succeed, Huawei could learn a thing or two from Cisco Systems, the last vendor that managed to break into the server market, according to Giorgio Nebuloni, research manager at IDC.

“It should learn from Cisco’s focus on ISVs. It started with VMware, and has expanded with SAP, Microsoft and Oracle to create communities around the different software platforms,” Nebuloni said.

The deal with SAP is a step forward for Huawei, but it needs a whole ecosystem of software partners. If that isn’t in place it might be able to sell some boxes, but not whole enterprise solutions, according to Nebuloni. It also needs to build out a channel and work on improving its brand, he said.

Getting a foothold in the storage market may turn out to be easier for Huawei. While the server market is very consolidated, the storage sector is more fragmented and growing faster.

“You still have lots of innovation going on. So with disruptive technologies you can innovate and gain a larger share,” Nebuloni said.

Like any company Huawei wants to play off its strengths when entering the enterprise sector, and for Huawei that’s networking. That the company decided to place its CeBit booth in the networking hall is no coincidence.

Again execution and channel expansion are the keys to success. Huawei is aware of this and has prioritized partnerships with the enterprise business branches of several European telecommunication operators, to whom it is already a strategic partner by supplying telco network equipment, the company said.

For Huawei, the Enterprise division is still only in start-up mode, as it was created just two years ago.