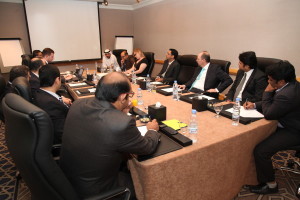 Unified Communications throws up a number of questions, and is something that would prompt 10 CIOs to give 10 different answers as to its definition. Its benefits are seemingly intangible, but is nonetheless regarded as a driver of productivity. This is perhaps the main reason why, in spite of its presence on the market for over a decade, adoption is still relatively slow.

The roundtable served as a forum which raised a number of issues among participants, with security threats and usability issues high up on the agenda.

Baher Ezzat, Regional Director, Alcatel-Lucent Middle East, set the ball rolling with his view on the trend’s definition and issues with adoption, “Unified Communications is a common interface for all interactions,” he said. “There are three important aspects to it—mobility, business alignment, and how to make it human.” Ezzat went on to underline the increasing importance of using a blend of vendors when implementing UC. “People used to rely on a single vendor, but now there’s a lot of disagreement on proprietary platforms. Everyone comes from a different starting point, and manoeuvering integration takes time, but is not rocket science.”

With most drivers of productivity, the end user experience is key. The participants highlighted how confusion and lack of usability had stunted their attempts to convince employees and customers that their implementations were straightforward.

Abdullah Al Shamsi, Head of IT, Dubai Aviation Engineering Projects, drew on his own experience to highlight a number of concerns with UC implementation and maintenance, “A main problem I have encountered is training employees to use the tool,” he said. “In my previous experience, users have complained. On top of that, maintenance isn’t easy, and it is challenging to keep up-to-date with the latest technology; by the time you have purchased it, you have to be thinking about an upgrade.”

David Horton, Chief Technology Officer, Mashreq Bank, discussed how Mashreq has implemented a video conference system for outdoor ATMs to give customers easier access to customer service assistants. “The service became fully operational about three or four months ago, and we currently receive about 200 calls per week,” he said. “The bank is taking a digital direction; we’ve equipped 27 of our branches with soundproof pods, but we’re finding that our call centre staff still need training when it comes to dealing with customers via video.”

Participants discussed the impact that UC has on existing infrastructure, and the overriding response was that this was a key hurdle in pushing through adoption.

Al Shamsi framed UC in the context of a demanding industry—aviation, “We’ve been looking at UC since 2006,” he said. “It’s always been a challenge to implement it within a running airport. The first challenge is marketing the idea and deploying it across the airport; there are a lot of technology and infrastructure limitations. One thing that I believe is crucial is not to overwhelm customers or employees with UC; it should be tailored to an organisation’s needs.”

Concerns over reliable security are endemic in the IT realm, and delegates highlighted how careful steps would need to be taken to ensure a UC solution would not fall victim to a range of attacks from outside sources.

Alok Srivastava, Head of IT, Masdar, drew attention to the need for robust security within UC, “We operate in a free zone, and so we have a need for enhanced collaboration with customers, and across the organisation as a whole,” he said. “An issue that I believe is crucial is to get a balance between the benefits of mobility with UC, but also the threats of weak security.”

The need for collaboration tools to operate together was also a hot topic, and Hatem Manawy, Regional IT Director, Gulf, Levant and Central Asia, Americana Group, told the group how he believes the introduction of UC should be gradual and not a wholesale replacement for other communication channels. “A problem—or indeed reality—of communication is the segregation between what is verbal and what is written,” he said. “I think that somewhere between the two a compromise can be found. UC is a useful addition to an organisation, not a complete replacement for all other channels.”