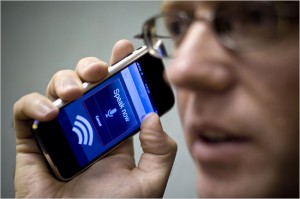 Google has an image of the future of search and it’s a bit sci-fi.

Google developers envision users talking to their computers much like the characters on Star Trek did. Want to know where the closest grocery store, or planet system, is? Simply speak your question to the computer. And it will speak it’s answer to you.

“It’s the end of search as we know it,” said Amit Singhai, a senior vice president and software engineer at Google, speaking at the Google I/O keynote on Wednesday in San Francisco.

The company laid out its plan for the future of search, talking about a search engine that not only answers your questions but has a conversation with you and offers information before you even ask for it.

Simply put, people don’t get information from each other by laying out keywords. They have conversations. One question leads to another. It’s a natural flow of information. And that is how Google wants it to be with computerised search.

The company said that soon you’ll be able to say, “Okay, Google, will it be sunny in Santa Cruz this weekend?” Then Google will answer you, and the conversation will continue with you asking how far the drive would be and then what attractions you could see there.

Google has had voice search in the form of a digital personal assistant, much like Apple’s Siri, but this kind of voice conversation takes it a few steps further and even brings the technology to the desktop.

“They’ve lapped Siri,” said Patrick Moorhead, an analyst with Moor Insights & Strategy. “The most important search improvements were around Google Now. The functionality is coming to the PC and they have added more voice actions. This provides a consistent and more comprehensive experience across phones, tablets and PCs.”

Brian Blau, an analyst with Gartner, said he was intrigued by the changes that Google has coming down the pike for search. He noted that Google is making search results much more personal.

Ask Google to pull up pictures of the Grand Canyon and it will give you pictures, instead of simply links to pages with pictures. Want Google to find the pictures on your own computer that you took during your last trip to New York City and it’ll pull those up, too.

For the voice search, Moorhead said it will just make search, even on the desktop, much more fluid and efficient.

“This would be good for making appointments or searching for the right restaurant,” he said. “Usage will be very low at first, but as confidence and accuracy improves, it will be used more.”