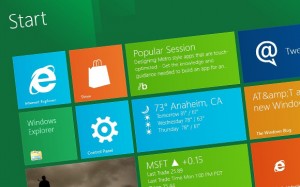 Microsoft will use “Windows 8” or “Modern” as replacements for the now-discarded “Metro” label to describe apps and their environment in the upcoming operating system, according to reports.

Recently, The Verge reported that Microsoft was stepping back from Metro as the label it’s used for more than a year to describe the new tile-based environment and associated apps in both Windows 8 and Windows RT.

Microsoft confirmed the depreciation of the term, but claimed that it had used Metro only as a code name, an argument that held little water as the company had never said as much regarding Windows 8 or Windows RT. Microsoft executives, and the company itself in innumerable press releases and developer documents, had used Metro to describe the apps and the WinRT-based environment they run in.

Microsoft has been using Metro to define a wide range of concepts in Windows 8 and Windows RT, from the underlying typographical-heavy design to the colour-subdued user interface (UI) for Windows programmes and services, including the upcoming Office 2013 and the previewed Outlook.com email service.

Foley’s bet was not the only one in the name-this-name game.

Today, The Verge’s Tom Warren pointed to an increased use of “modern” by Microsoft to claim that that word is the real substitute for Metro.

Warren spotted “Modern” in several places, including a blog on the MSDN (Microsoft Developer Network) site and a listing for an upcoming event aimed at IT professionals. In the latter, for example, Microsoft used “Windows 8 Modern UI Apps” to refer to Metro apps, and “Modern UI Style” to label the user interface of such software.

Microsoft has long used “modern” to describe Metro and Windows 8.

The two new terms, Windows 8 and Modern, could indicate confusion on the part of Microsoft or simply a placeholder status for one — perhaps the former — and the actual replacement.

Microsoft declined to comment on the usage of “Windows 8” and “Modern,” with a spokeswoman saying, “We have no information to share.”

Windows 8 is set to reach some customers this month, but will not go on sale until Oct. 26.

A description of an Aug. 16 event for public sector developers shows a widespread use of “Modern” as a label for what was once known as “Metro.”