The Telecommunications Regulatory Authority (TRA) has officially announced that the United Arab Emirates will host the Plenipotentiary Conference 2018 (PP18), the International Telecommunication Union (ITU)’s most important meeting, and the forum of adoption of public policies and regulatory strategies of global ICT sector. This announcement was made at a press conference organized by TRA at the Four Seasons Hotel in Abu Dhabi, with the participation of H.E. Houlin Zhao, Secretary-General of the ITU, H.E. Hamad Obaid Al Mansoori, TRA Director General, H.E. Majed Al Mesmar, TRA Deputy Director General for Telecommunications Sector, and Mahir Julfar, Senior Vice-President of Dubai World Trade Center, the conference host. 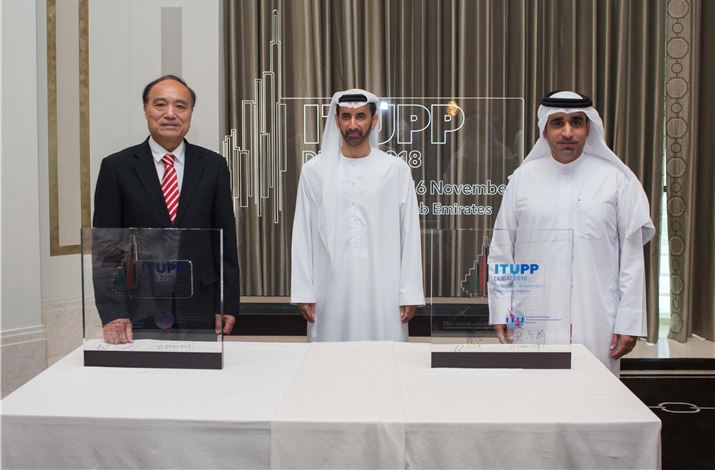 During the Press Conference, two partnership agreements have been signed with the ITU and Dubai World Trade Center, as part of preparations for next year’s conference. The conference also witnessed launching the visual branding of PP18, aiming to unify and organize the use of the conference brand. The visual brand is based on the UAE’s approach to enhance the use of ICT in building a bright future based on sustainability and knowledge economy, and shows some of the features of the country’s development.

The PP18, which is held regularly every four years, is the most important event in the ITU’s journey, during which the strategic decisions regarding the future policies of the sector are taken, as well as the election of many influential councils and committees of the ITU. Moreover, the ITU’s Secretary-General and the Directors of the ITU’s three sectors, namely the Radiocommunication, Standardization and Development, will be elected during this conference.

H.E. Hamad Obaid Al Mansoori, said: ‘Having the honour of hosting the PP18 by the UAE reflects the confidence that the global forums have in the UAE, and demonstrates the solidity of the relationship between the UAE and the ITU. This relationship has been enhanced through many joint events and UAE’s contributions to global projects organized under the ITU umbrella. This hosting also reflects the country’s leading position in the ICT field on the global level, and its role in developing and enhancing the ICT sector worldwide.

H.E. Al Mansoori confirmed the TRA’s confidence in its ability to achieve the success of the conference, due to its extensive experience in hosting major events, and its leadership in ICT, which is the key for development in all other sectors. He indicated that TRA is committed to develop a fair regulatory environment for the ICT sector in the country to enhance competitiveness and sustainability, improve the ICT provided services, and keeping pace with technological development, to achieve its vision of the UAE as a global leader in ICT, as well as the UAE Vision 2021.

The UAE has been selected to host the PP18 in 2014, and received many ITU’s committees in its preparation. Today’s meeting is part of the completion of the preparations through concluding the agreements, launching the visual brand and introducing the conference.

The meeting also witnesses the announcement of the appointment of H.E. Majed Al Mesmar as the chairman of the next Plenipotentiary Conference. H.E. Al Mansoori, and H.E. Mr. Zhao praised this announcement. Mr. Zhao commented that it is the first time that the chairman of the conference is announced at an early stage, enabling us to engage deeply with the presidency of the conference since this moment.