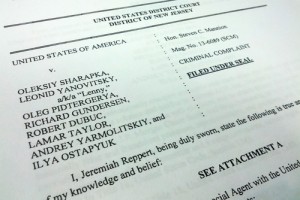 U.S. federal prosecutors charged eight people on Wednesday in connection with a multi-million-dollar fraud that siphoned money from hacked accounts at banks and financial institutions, laundered it and sent it overseas.

Four of the eight have been arrested by authorities, one as he arrived at New York’s John F. Kennedy Airport on Tuesday afternoon, while four remain at large. Prosecutors unsealed details of the case on Wednesday.

According to the Department of Justice, the scheme started in 2011 when hackers began gaining access to accounts at 15 financial institutions. They included well-known names such as Citibank, E-Trade, JP Morgan Chase, PayPal and TD Ameritrade, payroll processor Automated Data Processing (ADP), and niche organisations including the U.S. military’s Defense Finance and Accounting Service.

Once inside the accounts, hackers attempted to send money to pre-paid debit cards that they controlled. In the case of ADP, about US$4 million was sent from 130 compromised accounts to a series of cards held by one of the defendants, Oleksiy Sharapka, according to the government’s complaint.

Prosecutors allege that Sharapka and his associates also submitted fraudulent tax returns to the U.S. Internal Revenue Service in the name of identity theft victims, seeking refunds. The refunds were directed to bank accounts and pre-paid debit cards controlled by Sharapka, the complaint said.

Sharapka was already known to authorities. A resident of Kiev, Ukraine, he had served a 102-month federal prison sentence in Massachusetts from late 2004 until March 2012 for his part in a similar scheme that obtained money through stolen bank accounts and identity theft. In March 2012, he was deported from the U.S. to Ukraine to serve the rest of his sentence.

Once the money was in the debit card accounts, a team of “cashers” used a variety of ATM withdrawals and fraudulent purchases to convert the money into cash, according to prosecutors. The money was then transferred into a series of secondary bank accounts. Several of these payments were for $9,900, just $100 below the $10,000 threshold that triggers increased scrutiny under anti-money laundering laws, the government alleged.

To date, prosecutors said they have been able to track at least $15 million in stolen money.

In building their case against the defendants, prosecutors cited the value of hundreds of emails discussing the transfers sent by Sharapka to others from a Gmail account. The messages were accessed after a search warrant was granted by a U.S. District Court judge.