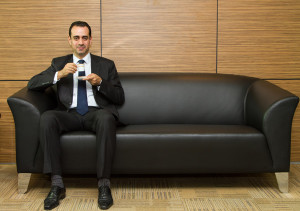 They say nothing broadens the mind like travel — if this is true, then the mind of Dr. Hazem Turki El Khatib should be fairly well-stretched. Having travelled from East to West, with family dotted everywhere in between, Hazem now sits in the chair of the CIO of the Department of Finance, within the Abu Dhabi government, and is recognised by IDC as one of the top five in his field.

Though of Palestinian decent, Hazem was born in, and spent his childhood in, Kuwait, before moving to Jordan to undergo his Bachelors. He studied database technology, the area of interest which drew his attention toward IT in the first place. During this time, Hazem’s supervisor recommended that he head to Scotland, in the UK, to study for his Master’s degree. And so, in 1996, a young man from the Middle East set off to Edinburgh for the first time, replacing the sand and sun for more brisk climes.

“It was my first visit to the UK, a real leap of faith. I knew nothing about it, I landed in Heathrow and looked to get a taxi to Edinburgh from the airport,” laughs Hazem.

“Luckily I had someone to advise me, he told me it would take me a good seven hours, it’s a long way, but I didn’t know this, I was only 21.”

In light of his discovery that a taxi from Heathrow Airport in London to Edinburgh in Scotland would cost the majority of his life savings and potentially take up the best part of his weekend, Hazem spent the night in London before hopping on another plane the following day and heading north.

Hazem remembers Scotland with great passion. “It was very calm and nice,” he says.

“Princess Street and the castle was interesting to me, though the accent was difficult. The first couple of months I spent trying to socialise with the people, but I found the accent so difficult to get used to, but it is still a very lovely city, and I still love it to this day — and eventually I got used to the accent.”

Highland guidance
Hazem recalls a special role model during his time studying, a time which he remembers as extremely tough. Tough enough, in fact, to make him question whether he could succeed there at all.

“My supervisor, a professor, he was my role model, I appreciated him very much, he gave me so much support. It wasn’t easy for a chap from the Middle East to go to the UK and do a PhD. In the first couple of months I wanted to quit — I felt I couldn’t make it. I called my father and he told me I had to continue, he said I must keep going.”

Hazem was spending nearly 12 hours a day studying for his PhD and recalls not seeing Edinburgh in the evening before his first four months had passed due to his high work rate.

An irrefutable offer
The hard work didn’t take long to pay off though. Hazem hadn’t even graduated from Edinburgh before he was on his way to Heathrow again to meet for an interview for a consultancy job in California in the United States of America.

“I’d had a job opportunity in Silicon Valley and was offered a job right there on the spot,” he says.

“I had two offers in fact; I was also offered a role at Motorola, based in Reading, in the UK. I obviously chose California. I liked California before I’d even moved there. I had read all about the people and cultures, it seemed so exciting.”

Hazem moved to the west coast in early 2001 to begin his consultancy role, which allowed him to travel each week from state to state.

“It’s a multiport kind of state, it’s great. If you’re in Silicon Valley then you know you’ve got a talent. Not just anyone could work there, it means you have a reputation. These are profit companies, so working here gave me the impression that I had the right skills and education.”

Student to teacher
However, this role wasn’t forever for Hazem, and his family’s wishes helped to persuade him to relocate back to the Middle East only a few short years after. In 2003 he took up a post as a professor at a university in Al Ain, UAE.

“Having a PhD meant that I had to experience a few different things, so the move to teaching was good for me. I achieved a lot while there, I was promoted to an associate professor level, which, at my age, was a massive accomplishment. At this point in my career I had gained my Master’s and PhD by the age of 26, and then become an associate professor by 33.”

It was from this position that Hazem was offered a CIO role in one of the government departments in Abu Dhabi before the Department of Finance snapped him up in 2010.

Since joining the Department of Finance, Hazem has received multiple awards and accolades and claims that many government entities find it hard to believe that the department is really attempting and achieving what they is.

More to achieve
But this may not be the final step of the ladder for Dr. Hazem Turki El Khatib. He still claims to have more fire in his belly, and believes that a more executive role in business could be on the cards, either in his motherland or even back in the West.

“I know the IT business, but maybe I need to know more about other areas; economics, finance, etcetera. I know how to make projects succeed — I’m a workaholic. I’ve always been really focused on my work in any job I’ve had.”

Though, he has no plans to leave just yet, Hazem and family are happy in the UAE. However, labelling home comes with difficulty.

“I am a Jordanian national, a Palestinian national, my children have US citizenship, I was born in Kuwait and lived there for 15 years, I have family in Holland, America, Germany, Canada — the world is my country.”

Hazem, to this day, believes that this wide cultural exposure throughout his life helps him, day-to-day, to communicate with all types of people and has been one of the key skills that has led him to where he is today.