“Sharing is vital,” according to Ohood Al Shuhail, director general, Ajman Digital Government, during a keynote session highlighting the role of data in driving the digital economy, closing the gender gap, and implementing the UN’s Sustainable Development Goals 2030.

Al Suhail made her remarks at the UN World Data Forum 2018 – organised by the Federal Competitiveness and Statistics Authority (FCSA) – convened at Dubai’s Madinat Jumeirah.

In a dialogued titled “How to Drive Digital Economy through Data”, Al Suhail noted that most people are still reluctant to share personal information, citing statistics that showed 52 percent of 107,000 people polled were not open to sharing data even if it would lead to better services. 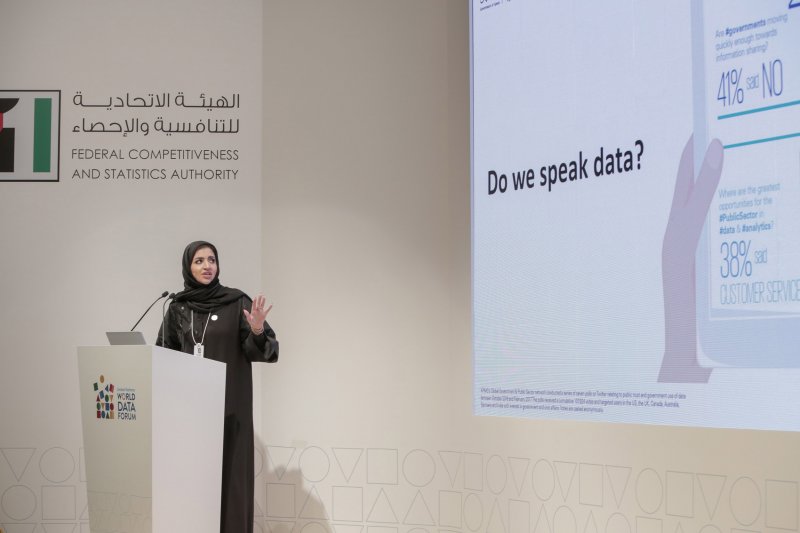 “There is now a fourth type of literacy – data literacy. This is the ability to read, write and communicate data in context, including an understanding of data sources and constructs, analytical methods and techniques applied, as well as the ability to describe the use-case application and resulting value,” Al Suhail said, noting that by 2020, some 25 percent of large organisations will be either sellers or buyers of data via formal online data marketplaces and that the old model of data analytics no longer worked.

Al Suhail went on to outline the Ajman Government’s roadmap for data, which will oversee all data in the emirate. This includes footfall analysis for decision-making and developing awareness for Ajman government officials.

Speakers at the session explored a range of data and statistics on gender, assessing how they can be used to achieve the most important SDGs, such as empowering women in political, economic and social fields, as well as education and healthcare.

The experts went on to highlight a number of humanitarian issues related to women and children, such as sexual harassment, domestic or gender-based violence, and the need to fill the data gap in this regard to enable informed decision-making.

“Gender-based data sheds light on women, in particular, with statistics on breast cancer, gender-based violence, and unpaid labour. We will be channelling our efforts towards filling the data gaps in that regard, especially those pertaining to health, education and security,” said Pryor.

Another session on day one of the Forum explored the progress made in the SDGs 2030, titled “Monitoring the SDGs 3 Years In: How Are We Doing?”, bringing together Leesha Delatie-Budair, Deputy Director General of the Statistical Institute of Jamaica (STATIN); Enrique Ordaz, Director General of Integration, Analysis and Research at INEGI; Robert P. Ndugwa, Officer in charge of the Global Urban Observatory Unit in the Research and Capacity Development Branch at the United Nations Human Settlements Programme (UN-Habitat) in Nairobi, Kenya; Clint Brown, who manages all ESRI product releases; Gatlin Roberts, Chief Statistician at the Statistical Office of Saint Vincent and the Grenadines; Gemma Van Halderen, Director of the Statistics Division in the United Nations  Economic and Social Commission for Asia and the Pacific (ESCAP).