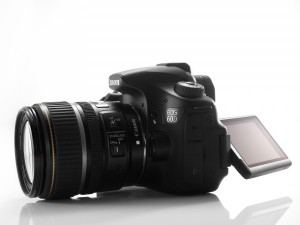 Canon’s EOS 60D comes as a replacement for the EOS 50D, which was a solid, semi-pro digital SLR that came with some nifty features and plenty of reliability. The 50D was also the follow-up to the extremely well-received EOS 40D. The new 60D, then, has got an impressive bloodline.

Canon has made good use of this DNA and come up with yet another great DSLR to add to its EOS range. It comes with an 18-megapixel sensor that borrows the same low-pass filter that you find on the pro-spec Canon EOS 7D. You can also boost the ISO to 12,800 and it comes with a fantastic iFCL metering system, all of which can be found on the professional camera.

Another big talking point on the 60D is the swivel-out, three-inch screen, which offers a 3:2 aspect ratio. This is the first swivel screen that Canon has fitted to one of its DSLRs, and it’s clear to see the benefits from the off. Interesting photo angles are easier than ever to obtain, meaning that the 60D is useable in just about any scenario. It also begs the question why more professional-spec DSLRs don’t come with a swivel screen.

The photo quality is what’s expected of a camera in this price range. The 60D will offer startlingly clean images all the way up to ISO 1,600. Even past this, it’ll take some zooming to see any real visual noise. The noise becomes an issue past ISO 3,200, though, particularly on JPEGs, and it’s intolerable by ISO 6,400. Shooting raw will combat the problem, but it will also result in a loss of shadow detail, so it’s up to the user to decide which way to go.

The colours burst with vibrancy, even when the camera is set to its default settings. The sharpness could take some fiddling with, but this is a very capable DSLR straight out of the box. A good few weeks of heavy use might be required to get to grips with all the settings, though; it can be difficult to know if fiddling with the buttons is making things better or worse.

The EOS 60D sports one of the most well-sorted autofocus features on any semi-pro DSLR, however, the same cannot be said for the automatic white balance. It’s not bad under well-lit conditions, but in a mixed-lighting environment, the quality of the images drops. Of course, this can be remedied by manually adjusting the white balance, but it’d be nice if the automatic function worked a little better.

The 60D works extremely quickly. Canon claims that it will focus and shoot in good light in 0.3 seconds. It’ll take about 0.5 seconds for a lower-contrast shot, but that’s still not bad at all. What’s more, the autofocus is brilliant at picking out the right parts of the picture. There’s also a 5 fps burst mode, which is actually a frame slower than on the 50D, but the quality of the images makes up for the lack of frames.

Another aspect that has moved this line of cameras forward is the HD video capture, which is extremely smooth and produces great, high-quality shots. With some decent video mastering software, it’s possible to shoot high-quality movies with this thing. Indeed, the 60D is now a well-used tool among indie filmmakers.

It’s possible to shoot at a number of different frame rates and the manual controls allow users to customise the shots very nicely. Even when it comes to recording audio, the 60D performs well, despite the mono sound. There’s a wind filter with 64 levels of control, too, so shooting outside shouldn’t affect the sound too much. In the UAE sun, however, the LCD screen does become a little hard to view.

Apart from that, the 60D is a difficult camera to fault. There are a couple of annoyances with the interface, but they’re easy to work around after a week or so. And the LCD screen could be a little brighter. Die-hard Canon fans will fall head over heels for this camera. For everyone else, the good points still heavily outweigh the bad.