At its hardware launch event in San Francisco, Google officially announced its new Pixel and Pixel XL Android Nougat-based flagship phones. The company noted that these are the first phones with Google Assistant built in and ready for the company’s Daydream VR platform. 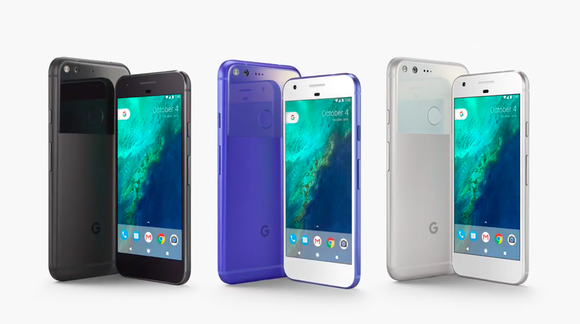 Google highlighted that the 5-inch Pixel and 5.5-inch Pixel XL are noteworthy because of the software and services attached to them. It said that users of the two devices will not only be able to launch the interactive Google Assistant from their home buttons, but the phones will come with an unlimited amount of cloud storage for photos and videos at original quality, including 4K videos, compliments of Google.

With Assistant, “The goal is to build a personal Google for each and every user,” said Sundar Pichai, CEO, Google, at the company’s launch event in San Francisco.

Pixel is avaialable at 32GB up to 128GB of storage configuration. Google didn’t mention an SD card slot, unfortunately. Google said that the both the Pixel and the Pixel XL will include a 12.3MP rear camera as well as an 8MP front-facing selfie camera. Though the megapixel count is lower than in some competing phones, the Pixel has 1.55-micron image sensors and a f/2.0 aperture—the emphasis here is on capturing sharp pictures in low light, the priority for most modern flagship smartphones. “The camera on Pixel is just excellent,” Rakowski said.

By holding down the camera button, the camera will take a “smart burst”: a stream of images, of which Google will pick the best shot. A new technology called HDR+ splits the shot into multiple short exposures, minimizing noise and blur and providing better dynamic range. HDR+ is on by default, since there’s virtually zero shutter lag, Rakowski said. The camera has a faster shutter time than any one the company has tested, he said, and camera stabilisation for video is also there as well.

The phones will be made of aluminum, and without the “unsightly” camera bump that comes on other phones, said Rick Osterloh, the head of Google’s new hardware division. The Pixel has a standard 5-inch, 1920×1080 (534 ppi) AMOLED phone, the Pixel XL includes a 5.5-inch, 2,560×1,440 (441 ppi) AMOLED display. Gorilla Glass 5—which Corning says will protect the phone from 5-foot drops onto hard surfaces about 80 percent of the time – will cover the front. It is also equipped with a 3.5-mm headphone jack.

According to Google, users will be able to unlock your Pixel with a one-touch fingerprint sensor. Both phones are powered by a quad-core Qualcomm Snapdragon 821 64-bit processor, a pair of 2.15-GHz cores when your phone needs the extra power, and a pair of 1.6-GHz cores for lower-power tasks to optimise battery life.  Each phone also contains 4GB of LPDDR4 memory.

Google has also hidden a 2,770mAh battery within the Pixel as well as a 3,460mAh battery within the Pixel XL. Neither appear to be removable. Everything will be powered by a USB-C cable, with a quick-charge adapter. Google help support will be built in, and there will be a range of cases. It will be available in black, silver, and blue. It will also be ready for DayDream, Google’s VR solution.