Dubai has launched the ‘Smart Safety Bus’ for raising the traffic awareness of students in schools within the emirate.

The Roads and Transport Authority (RTA) Director-General and Chairman of the Board of Executive Directors Mattar Al Tayer has inspected the smart devices fitted to the ‘Safety Bus’ along with the programmes and apps on board which alert students on the rules of traffic safety and features of the bus. 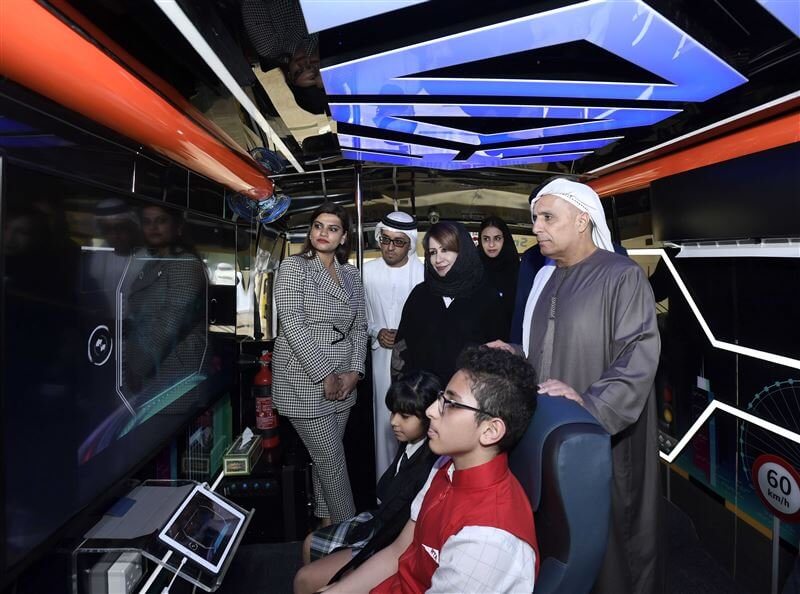 The interior and exterior design of the bus is tailored to deliver traffic awareness messages to students and encourage them to comply with.

The overall objective of launching the bus is to maintain the zero traffic-related fatalities within schools localities. Over the last seven years, the RTA has succeeded in maintaining a zero-fatality rate within school zones.

In addition, the interior and exterior of the bus have been designed according to a scientific and technical plan discussed with the project owner (School Transport Services). It is built on the concept of a recent study that blends education with entertainment (Edutainment) in a bid to instil a sound traffic awareness culture amongst the upcoming generations. The new technique is considered much better than traditional means as far as the training of children on the principles of traffic safety is concerned.

The bus has been fitted with interactive e-screens displaying entertaining and educational materials, edited by traffic safety specialists at the RTA. The awareness devices extend outside the vehicle to include dangerous and most hazardous spots on the ground in the surroundings of the bus; which are highlighted in different colours. The hazardous spots make sound alerts when students attempt to cross them while solar panels on board power the screens and programmes.

“The RTA attaches paramount importance to traffic safety and has integrated it in its vision of ‘Safe and Smooth Transport for All’. It has also carried out a series of projects, plans and initiatives to revamp and revamp the entire concept of traffic safety and curb pedestrian fatalities amongst road users in Dubai. The RTA is also coordinating with the Dubai Police on the implementation of the 5-Year Traffic Safety Strategy built on four key pillars: traffic monitoring and enforcement, vehicles and roads engineering, traffic awareness, systems and management as well as key performance indicators with Dubai traffic safety targets 2017-2021. Road fatalities dropped from 21.9 cases per 100,000 of the population in 2005 to only 2.4 cases per 100 thousand of the population in 2018,” explained Al Tayer.

Maitha bin Adai, CEO of Traffic and Roads Agency elaborated on the objectives of launching the ‘Smart Safety Bus’ which focus on raising the traffic awareness of students aged 6-14. “Most awareness programmes run on board the bus are tilted towards educating students about the traffic safety procedures whether on board, around the bus or while crossing the road,” she said.

Bin Adai then noted that the ‘Smart Safety Bus’ programme highlights the hazardous spots in and around the bus that automatically sound off alerts when students approach them. Various educational videos on traffic safety principles are shown in a fun way linked with questions to assess students’ understanding of the information provided. It also contains the interactive wall game enabling students on-screen games together with the safety pledge prompting students to take traffic safety issues quite seriously,” added Maitha.

According to the RTA, delivering the bus programme comprises of two phases. The first one is designed for the second semester of the current academic year; which covers 30 private schools in coordination with school management and the Knowledge & Human Development Authority. Phase 2 will be implemented during the next academic year, covering 45 public and private schools in coordination with the Ministry of Education.

Steve Burnell, managing director of School Transport Services, said the awareness tour of the smart safety bus will be kicked off this March. “A safe place in parking lots of schools will be designated for the bus. All security and safety precautions will be addressed when training and familiarising students with the contents of the bus. The cooperation with the RTA in this regard will contribute to the common objectives of the education and safety.”