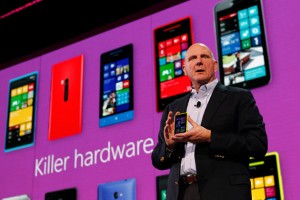 Microsoft has launched Windows Phone 8, with the hope of reclaiming a portion of the fast-growing smartphone market.

The tech giant has been largely absent from the smartphone market during its most-recent years of explosive growth, but market watchers predict the company will soon start to gain share after Monday’s launch.

At an event in San Francisco, Joe Belfiore, Corporate Vice President of Microsoft and head of its phone division, presented new features of the operating system, and CEO Steve Ballmer presented new handsets.

The flagship of the Windows Phone lineup is the Nokia 920, built out of a partnership between the two companies. It will be available through AT&T in the U.S. in November.

All three phones will be available in Europe from this weekend and in the U.S. will go on sale through Verizon, AT&T and T-Mobile. Pricing and availability details are expected to be announced by carriers on Monday or soon after.

The software presents a very different home screen from the rows of icons found on Apple or Android phones and is a key design feature of the operating system.

Its design uses the same active tiles found on Windows 8, Microsoft’s new PC operating system that launched Friday. The tiles are constantly changing with fresh information so, for example, a weather tile will update with the latest forecast while the email app will show the latest message received.

“The static grid of icons has been the standard on smartphones,” said Belfiore. “We decided not to use that tired old metaphor. Our way is to put people at the centre of the experience.”

People users interact with can be given their own tiles so that the latest interactions on email or social media are updated.

“It’s the most personal smartphone operating system you can get and keeps you closer to the people that matter most in your life because of that,” he said.

Belfiore announced a number of new apps that will be available for the platform including versions of Facebook, Twitter, Skype, Angry Birds, Urban Spoon and, from early 2013, the Internet music streaming service Pandora will be available. Windows Phone 8 customers will get a year-long free subscription to Pandora’s ad-free service.

“We estimate 46 of the 50 most-used smartphone apps will be on Windows Phone 8,” said Belfiore.

Users will have a selection of around 120,000 apps available for the phone, he said. “That’s huge progress for us.”

A new lock screen that shows app content, such as sports scores, news or favourite photos, rather than a static image, was another of the features shown Monday.

To work, the feature needs carrier support. Verizon will be the first carrier in the U.S. to support it. Other carrier partners were not announced.

A similar tile-based home screen was used by Microsoft on Windows Phone 7, the predecessor to Windows Phone 8, but it didn’t have the live updating feature.

The previous operating system succeeded in roughly doubling Microsoft’s market share but failed to prove a hit with consumers. With the new software, Microsoft has put a lot more effort into polishing the user experience and attracting major phone makers to the platform, so greater success is expected.

The sale of the phones will signal the start of a showdown the size of which hasn’t been seen in the mobile market for years. The new Windows handsets will compete against Apple’s iOS and recently launched iPhone 5, which is the most popular smartphone, and also will compete with the fast-growing number of handsets based on Google’s Android operating system, the most popular smartphone operating system.

Analysts believe the software will propel Microsoft into the number-three position as early as next year, when Windows Phone-based smartphones are expected to make up 6.6 percent of the smartphone market compared to 1.8 percent last year, according to IDC. By 2016, Microsoft will enjoy a 14.2 percent share, trailing Apple at 21.2 percent and Android at 58.6 percent, predicted IDC.

Attracting a large number of developers is key. Microsoft has been making an SDK (software development kit) available to some under a program, but Belfiore said the software company will on Tuesday announce a freely available SDK for the platform. The announcement is due to be made at its Build conference.