On 28th March, representatives from Blue Coat Systems met with top CIOs of the region to discuss data protection, tokenisation and the cloud. 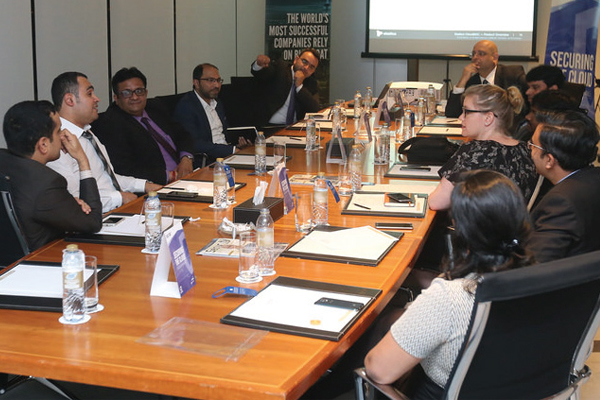 Blue Coat Systems, the enterprise security firm, along with CNME, hosted a CIO Roundtable at Jumeirah Emirates Towers. Representing Blue Coat were Bashar Bashaireh, General Manager, Middle East, and Bayan Achkar, Senior System Engineer. In attendance were a number of top CIOs from around the region, hailing from industries such as aviation, food and beverage and healthcare.

The subject of the day was cloud security, a topic which as a top provider of on-premise, hybrid and cloud-based solutions for protecting web connectivity, the experts at Blue Coat were more than prepared to share thought leadership with the attendees.

After a brief presentation from Achkar on the latest threats and corresponding solutions, the floor was opened up for general discussion. The CIOs present shared where they were in terms of adopting cloud solutions. “We are preparing to move some things into the cloud,” said Samir Khan, CIO, African and Eastern. “There are many factors to consider, and preparation is important.”

In contrast, some companies had already moved some of their core apps to the cloud. Vignesh Unadkat, CIO, Thumbay Group, for example said, “Our data is still on-premise, but we have many applications on a private cloud. The privacy of our data is extremely important, as we are bound by legislation to retain patient health records for three to seven years.”

In terms of legislation, the CIOs present also expressed some concerns regarding data loss and cybercrime. “It doesn’t seem clear,” said NSN Murthay, head of IT, Avivo Group, “where the law lies when it comes to data. If a criminal steals data from your company, but the data is stored in a centre in another country, and the criminal is in a third country, everything becomes more complicated.”

Hashem Neama, IT Project Manager, Gulf Air reported that the company is leveraging cloud-based technology in myriad ways. However, he understands the general concerns around the issue. “We all need to ask ourselves, ‘How do you know where the data is?’” he said.

Bashaireh and Achkar agreed that data sovereignty is an issue, but put forth Blue Coat’s system of tokenisation as a solution. “Tokenisation replaces sensitive data with a surrogate value. If the tokens are somehow taken, they are useless to the criminal,” explained Achkar. “Tokens can be used to achieve compliance with requirements that dictate how sensitive data needs to be treated and secured by companies, and keep sensitive data out of the wrong hands.”

All in attendance agreed that cloud computing and storage were no longer an option, and that cloud technologies were the way of the future. The consensus was, however, that there needs to be a way to protect and monitor data in the cloud. Technologies such as Blue Coat’s tokenisation, it was agreed, are valid options in protecting this data moving forward.