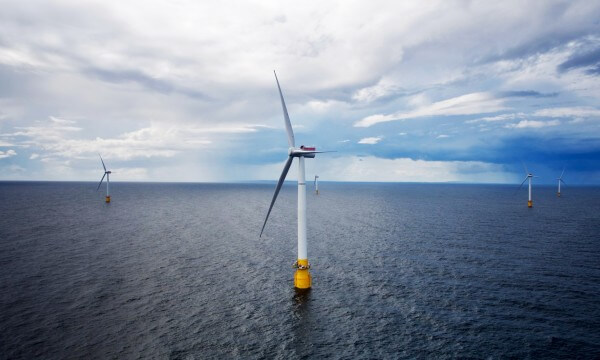 The battery storage solution is the first in the world to be connected to an offshore wind farm. The project is designed to evaluate the capabilities of advanced storage technologies to optimise the release of electricity from renewable energy plants to transmission grids – from both a technical and commercial perspective.

Deployed at an onshore substation, the battery system known as ‘Batwind’ has a storage capacity of 1.2 megawatts, equivalent to the battery capacity of more than 1.3 million iPhones. By helping to mitigate peaks and troughs in production, the project aims to maximise the commercial value of Hywind Scotland’s electricity output.

Following the successful installation of Batwind, Masdar and Equinor will now explore how the new storage solution can be utilised to improve the operational and cost efficiency of other wind farms – to open up new commercial opportunities in an expanding global wind power market.

Bader Al Lamki, Masdar’s Executive Director for Clean Energy, said, “Energy storage is vital to unlocking the full potential of renewables by mitigating the variable nature of wind and solar power. Batwind will help us to understand how we can deploy this new technology in future projects, both in solar power and wind power plants.”

“Batwind exemplifies how we at Masdar are moving forward with our partners, through innovation and collaboration, to bring commercially viable solutions to the renewable energy sector,” he added.

According to a recent International Renewable Energy Agency, IRENA, report from last October, the cost of installing battery storage systems could fall by two-thirds (66 percent) by 2030. Masdar has played a key role in developing energy storage solutions as part of its commitment over the last decade to advance commercially viable clean technologies. An example is the Gemasolar concentrated solar power project in Spain, the first in the world to use molten salt thermal storage and able to generate electricity 24 hours a day.

Operational data from Batwind will be assessed based on the weather, market prices, and consumption patterns to create an intelligent and optimised storage system.

“The variability of renewable energy can to a certain extent be managed by the grid, but to integrate even more renewables, we will need to find new smart solutions for energy storage to reduce system integration costs and provide firm power,” said Sebastian Bringsvaerd, Hywind Development Manager. “How to do this in a smart and value creating way is what we are aiming to learn from Batwind.”

The Hywind Scotland wind farm was inaugurated in October 2017. Masdar holds a 25 percent stake in the project, while Equinor owns the remaining 75 percent. The wind farm is made up of five 6-megawatt turbines floating 25 kilometres off the coast of Peterhead in northeast Scotland.

The project is Masdar’s second offshore wind partnership with Equinor, after the Dudgeon Offshore Wind Farm in the English North Sea. Combined with London Array, currently the world’s largest offshore wind farm in operation, the projects bring the total capacity of the UK renewable energy projects in which Masdar is an investor to over 1 gigawatt.

Since 2006, Masdar has invested in renewable energy projects with a combined value of US$8.5 billion; the company’s share of this investment is $2.7 billion. Besides the UK, Masdar’s renewable energy projects are located in the UAE, Jordan, Mauritania, Egypt, Morocco, Montenegro, Serbia and Spain. The electricity generating capacity of these projects, which are either fully operational or under development, is around 3 gigawatts gross.