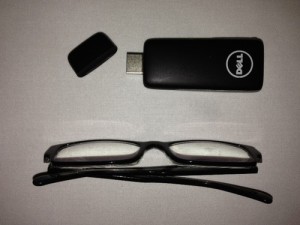 Dell has started shipping its thumb-size PC called Project Ophelia to beta testers and is preparing to ship the final product in the coming months.

Ophelia looks much like a USB stick and it can turn any screen or display with an HDMI port into a PC, gaming machine or streaming media player. The thumb PC runs on the Android OS and once it is plugged into an HDMI port, users can run applications, play games, watch streaming movies or access files stored in the cloud.

The final product will ship during the next fiscal quarter, which runs from August through October, a Dell spokesman said in an email. The device has Wi-Fi and Bluetooth wireless connectivity options.

Priced at about $100, Dell hopes Ophelia will be an inexpensive alternative to PCs, whose shipments are falling with the growing adoption of tablets and smartphones. With more data now being stored in the cloud, Dell hopes the idea of a keychain PC will catch on, especially for those who do most of their computing on the Web.

The device will also compete with Google’s recently announced Chromecast media streaming device, which is priced at $35 and also the size of a thumb drive. With Ophelia, users will be able to run Android games or stream movies from Hulu or Netflix, and even download apps, movies and TV shows from the Google Play store.

One of the value propositions of Ophelia is that it is a light-weight PC alternative, said Charles King, principal analyst at Pund-IT.

“Being able to carry their desktop in their pocket rather than having to lug it around would perhaps make a great deal of sense,” King said.

Ophelia won’t offer high-end performance, but it has Android and can take advantage of an applications stack already installed on many smartphones and tablets, King said, adding that for some, that is more than enough.

Ophelia could also be attractive to companies looking to cut costs or trying to escape PC upgrades to Windows 8, King said.

“A lot of businesses are faced with whether or not they want to move on to Windows 8 and buy the necessary equipment,” King said.

Ophelia takes that upgrade cycle in a “radical direction” by replacing PCs with a pocket-size thin client, and Windows with the Android OS, King said.

Dell has demonstrated Ophelia running on 19-inch and 55-inch screens. The company said it will offer hands-on demonstrations at future trade shows in which the company participates.

Dell also hopes to build in some enterprise features to differentiate Ophelia from other consumer-focused thumb PCs, many of which are based on Android.

Ophelia will also come with Wyse’s PocketCloud, which allows users to access files stored on PCs, servers or mobile devices.

The device could be attractive to sales staff, field personnel, and maintenance crews, King said.

Dell has said it will sell Ophelia through its website and also through wireless carriers and cable companies. Dell originally announced Project Ophelia at the International CES in January.