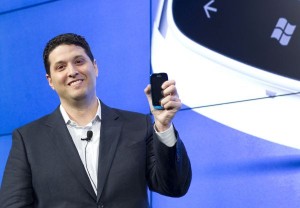 Microsoft’s top executive for mobile phones took shots at both iOS and Android on Tuesday, calling Apple’s operating system “boring” and claiming Google’s is “a mess.”

“With Apple, I sense a lack of urgency,” said Myerson. “When iOS 5 came out and there was a fifth row of icons and not much else, you say, okay, are they running out of steam, is iOS getting boring?”

Myerson was repeating contentions by others that Apple has ceded ground, not only in sales, but also in its once-unassailable position as king of cool, to rivals like Samsung.

He didn’t stop there, bashing Google’s Android as well as its Chrome OS project. “With Android … it’s kind of a mess,” Myerson said. “Chrome [OS] and Android coming together, Chrome [OS] does not offer the flexibility of Android.”

He elaborated on Chrome OS, Google’s browser-based operating system that has been adopted by some Microsoft partners to power low-priced notebooks.

Chrome OS, said Myerson, is “as locked down as any locked-down pre-regulation version of Windows ever was or is,” then went on to say that Google’s claim it isn’t planning to merge Android with Chrome OS is “just BS.”

However, when All Things D’s Ina Fried asked whether Microsoft would allow Facebook Home – for now an Android-only app that sits between the user and the smartphone’s usual home and “lock” screens – on Windows Phone, Myerson dodged the question.

While he complimented some of Facebook Home’s features, he did not answer Fried’s question, instead saying “We’ll want to work with them [but] our goal is to provide a platform such as our partners can achieve their differentiation.”

Microsoft has taken swipes at Facebook Home before. Two weeks ago, after Facebook unveiled the app-slash-interface for Android, Microsoft’s head of communications, Frank Shaw, belittled it as an old idea that was little more than a copy of what Windows Phone launched in 2011.

In an interview today, Patrick Moorhead of Moor Insights & Strategy agreed with Shaw. “Facebook stole, or copied, many of the ideas that make up Windows Phone 8,” said Moorhead.