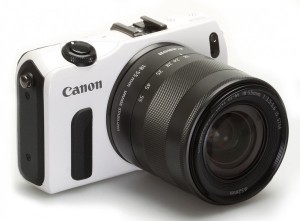 The EOS M is Canon’s first compact interchangeable lens camera. On the face of it, it aims to bridge the gap between the firm’s quite capable compact cameras and the mostly stunning DSLR units in the EOS range.

Because it bears the EOS moniker, though, you’d assume that the EOS M was more in line with the DSLR family than with the compact camera family below it. And with a recommended retail price of Dh3,299, you’d certainly hope so, too.

Canon justifies the name – and price – by the fact that the EOS M shares many of its innards with the EOS 650D, a fantastic, semi-professional DSLR. The difference is that the M lacks a reflex mirror and an optical viewfinder. So how does it fare as the bottom rung on the EOS ladder?

In terms of the look and feel, there are no complaints. While there are a distinct lack of controls on the body – there isn’t even a viewfinder – you do get a beautiful touch screen with which to control the camera’s functions. The body is made of magnesium alloy, and is available in four colours. Like most Canon cameras, it feels like it’s been manufactured to the highest standards, and that it won’t break in a hurry.

That said, the EOS M is a little heavy for its size. You’ll just about fit the body into your pocket, but that won’t be possible with either of the two available lenses attached. You can either fit the fixed EF-M 22mm f/2.0 STM or the zoomable EF-M 18-55mm f/3.5-5.6 IS STM lens. Given our disdain for digital zoom of any kind, we stuck with the latter, as a lack of any optical zoom at all really limits your photographs.

With the zoomable lens, however, a world of opportunities awaits. The maximum of 55mm is more than enough when shooting portraits, while events photography is made much easier given the amount of choice the lens gives you.

That said, the autofocus can be a little dim-witted in some situations, particularly when there are varying levels of light in the same shot. You can get round this by simply touching on the screen when you want your shot to be focused, and the camera will, for the most part, sort everything out. If you’re a real professional, you can turn the aids off, but it’ll be a challenge getting a good shot due to the lack of physical controls on the body.

Aside the autofocus issues, the EOS M is a very capable camera, thanks largely to its 18-megapixel APS-C ‘Hybrid CMOS’ sensor. The ISO performance is fantastic, ranging from 100 to 12,800 standard, or to 25,600 expanded. Of course, images can begin to appear a little grainy once going past the standard limit, but they’re fine if you only want them for Web use.

Meanwhile, the touchscreen itself is responsive and bright – probably the best touch-operated screen in this segment. And the user interface is simple and easy-to-use. We wouldn’t have minded more options, to be honest, but given the target market, what Canon provides with the EOS M will probably be enough.

You don’t get a built-in flash with the EOS M – instead, the camera comes with a hot shoe on the top plate. The standard flash that comes with the M provides about the same kind of picture quality as any compact camera, meaning it’s not great, given the great photos you can get out of the M when there’s plenty of light. Hopefully, Canon will offer more capable detachable flashes for this camera as time goes on.

One of the stand-out features on the EOS M is the way in which it records videos. Movies can be recorded in Full HD at 30, 25 or 24 frames per second, and you get stereo sound – much better than what many of Canon’s competitors can offer at this price point. Videos come out in the pretty-much universal MOV format, and that 18-55mm lens provides plenty of scope for capturing great shots.

Of course, the EOS M is no replacement for a real HD video camera, but it could work well capturing short clips for a personal montage. Then again, the EOS M is hardly a replacement for a well-sorted DSLR, either. The shots it takes are heads and shoulders above what you’ll get from the best compact cameras, but it’s by no means a professional product. What’s more, the small choice of currently available lenses means that buyers will be limited in their photography. Given most buyers will be upgrading from a compact camera in order to broaden their photographic horizons, this is a pretty big oversight.

That said, compared to what else is available in this market segment, the Canon does extremely well to make its case. And as soon as more lenses are available, this will be a seriously desirable product.