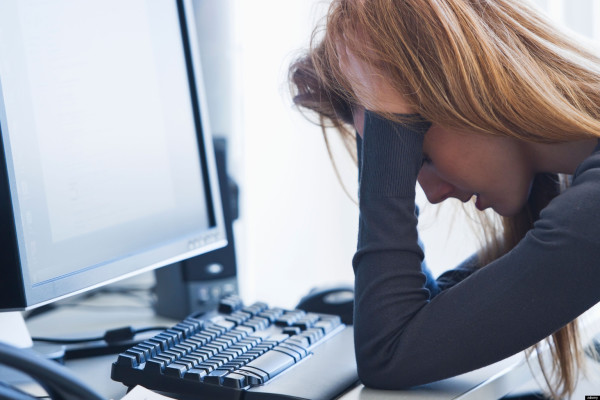 With each new change, employees are forced to adapt. That process of adapting is painful — physically and psychologically. That’s why we seem to get a new health problem related to technology every few years.

I want to tell you about the Mother of All technology-related health problems: technostress. But first, a history lesson.

When computers broke our bodies

Business PCs went mainstream in the 1990s. At the beginning of the decade, most people didn’t use PCs in offices. By 2000, pretty much all office work involved PCs. The use of mice and keyboards and the necessity of sitting and using a PC all day caused a pandemic of repetitive stress injuries, including carpal tunnel syndrome. It seems as if everybody got injured by their PCs at some point.

Then the 2000s hit. Mobile devices took off. Business technology use was diversified into laptops, BlackBerry pagers, PDAs and cellphones. We stopped hearing about carpal tunnel and starting hearing about “texting thumb” and other repetitive stress injuries related to typing on a phone or pager.

Around ten years ago, the technology health problems shifted from the physical to the mental. Employees started suffering from all kinds of psychological syndromes, from nomophobia (fear of being without a phone) to phantom vibration syndrome (where you think you feel your phone vibrating even though your phone isn’t there) to screen insomnia to smartphone addiction.

And now management science has identified a collection of problems caused by the accumulated effect of all our technology, called “technostress.”

What is technostress, exactly?

Technostress is actually not the latest malady in a series of technology-induced syndromes. In fact, it’s an umbrella term that encompasses all negative psychological effects that result from changes in technology.

Over time, technostress is increasingly related to compulsion. While connected, people compulsively check all the incoming communications streams and feel compelled to respond. Time seems to stop, and the work hours spent on compulsive messaging and social media is usually considered to take far less time than it actually does.

In the past, employees were able to focus on work while at work and personal lives while not at work. Today, smartphones and communication and social apps keep a constant stream of work and personal messages coming in 24 hours a day, and it’s taking a toll.

Just a tiny fraction of those surveyed by Microsoft — only 11.4% — said they felt highly productive. Technology, and the way it’s deployed, is not having the intended effect. It’s causing technostress, and lowering, rather than raising, productivity.

Most importantly, take this seriously. It’s the kind of thing managers, especially in IT, tend to dismiss. Technostress sounds like a fad disorder, a frothy buzzword without import. In fact, it’s probably the most costly problem in your organisation.

Technostress is caused by changes in technology, and the pace of change will keep accelerating. Artificial intelligence, data analytics, robotics, the internet of things, virtual reality, augmented and artificial reality — these changes will bring technostress to a whole new level.

As the changes accelerate, the harms of technostress will rise. Meanwhile, real cultural change takes time. The time to address technostress is now.