Global blockchain developer ConsenSys, hosted the graduation and certification of its inaugural Developer Programme class earlier this week, as part of its ConsenSys Academy initiative. 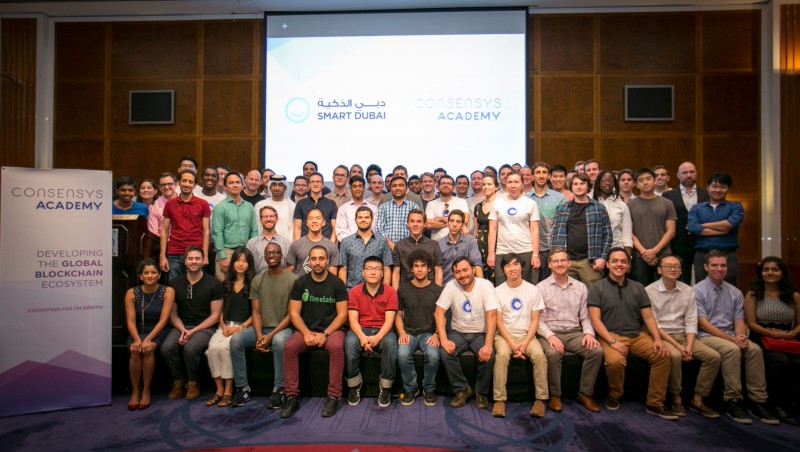 More than 150 guests and students attended a special graduation ceremony at the Emirates Towers Hotel, which included 58 graduating blockchain developers, two of which are from the UAE.

The gathering, which took place after an exciting three-day hackathon, was also graced by the presence of Her Excellency Dr. Aisha Bint Butti Bin Bishr, Director General of Smart Dubai Office, and Wesam Lootah, CEO of Smart Dubai Government Establishment, in addition to ConsenSys executives.

Since the announcement of the Dubai Blockchain Strategy 2020 by H.H. Sheikh Hamdan bin Mohammed bin Rashid Al Maktoum, Crown Prince of Dubai and Chairman of the Dubai Executive Council in October 2016, Dubai has attracted leading experts and talent from around the globe to help the city fulfil its goal of becoming the world’s first blockchain- powered government.

“The increasing global demand for blockchain developers led to the creation of ConsenSys Academy. It is very rewarding to see the first cohort of blockchain software engineers graduate and especially exciting to witness them awarded their Ethereum blockchain-based graduation certificates. These EthCerts will be housed in each graduate’s personal uPort IDs,” said ConsenSys’ founder, Joseph Lubin. “For this to happen here in Dubai is a testament to the city’s growing reputation as the global hub for blockchain leadership and innovation.”

“ConsenSys Academy’s initiative to address the global shortage in Blockchain developers resonates with our objectives at Smart Dubai,” noted Dr Aisha. “Empowering human resources and equipping them with the necessary skills to navigate the workplace of the future is a key tenet of our strategy, which, in turn, reflects the overarching strategy and mission of the UAE leadership for the foreseeable future and beyond, all the way to the UAE Centennial 2071.”

Nasser Alnuaimi, Information Security Officer, Smart Dubai Government Establishment, the first UAE national to graduate from this programme, said, “This course far exceeded my expectations. Not only did I learn the basics, but to be mentored by the likes of senior ConsenSys blockchain engineers was just incredible, and an experience I will cherish. As an Emirati, I must say that I am proud to play a small role in taking Dubai one step closer to achieving its goal of becoming the first Blockchain-powered city by 2020.”