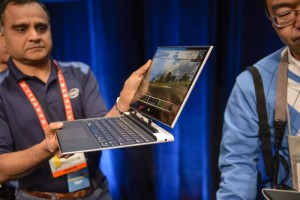 Haswell chips were designed with laptops and tablets in mind, and the main focus was on lowering power consumption, said Rani Borkar, corporate vice president and general manager of the Intel Architecture Group, in a media briefing.

The longer battery life won’t come with a cost to performance, according to Borkar. And in idle or standby mode the chips will do even better, extending battery life by up to 20 times, she said.

The improvements are vital for Intel and its PC-making partners. PC sales are in one of their worst slumps ever, with users snapping up tablets and smartphones instead for mobile computing. Any improvements Intel can offer will help keep the PC market alive.

Intel is expected to launch the new chips at the Computex trade show in Taipei next month. Haswell represents an update to Intel’s instruction set architecture, which it delivers every two years.

Intel has been talking up Haswell’s improvements for months. It says they’ll also offer double the graphics performance for laptops and up to treble the performance for desktops.

The chips are intended partly to bridge the gap between laptops and tablets, by offering longer battery life and optional detachable touchscreens and keyboards. PC makers are expected to show what they’ve managed to achieve with Haswell in Taiwan, including hybrid devices with screens that detach or fold back to make a tablet.

Intel has geared some of the Haswell chips toward tablet use as well, by reducing the power consumption of some parts to as low as 7 watts. The previous low for some of the Ivy Bridge Core chips was 10 watts. A tablet with a Core processor will offer similar battery life to a non-Intel tablet but more performance than a “content consumption” device, Borkar said.

Haswell chips achieve their low power consumption partly from an on-chip power management unit, which provides a “bird’s eye view” of energy consumption on the chip. It can dynamically adjust the power consumption in various parts of the chip to reduce the overall power draw.

Voltage regulators have been consolidated, another step to reduce power consumption that also allows smaller motherboards for Haswell chips, so they can be used in smaller devices. And Intel says a type of memory called embedded DRAM reduces the cost of building devices.

Faster interconnects on the chip also shave off some power use, according to Intel, because data is transferred more quickly, which means the processor cores can spend less time working.