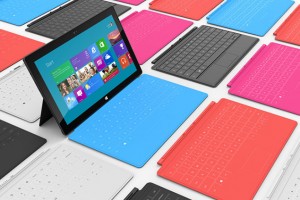 Just hours after Microsoft’s Surface Windows 8 Pro tablet went on sale on Saturday in the United States, the 128GB version sold out online.

Shoppers looking for the $1,000 tablet at the online outlets of Best Buy and Staples, as well as Microsoft’s own web store, began seeing “not available” or “out of stock” notices just hours after midnight Eastern Time, when the Windows 8 slate went on sale.

Although the 128GB edition of the Surface Pro has sold out online, that’s not the case with its $899 sibling, which has 64GB of solid state storage.

Surface Pro 64GB sales may be suffering from the criticism the device has received for the actual amount of storage space it provides for user content. Of the 64GB of space on its SSD, only 23GB (36 percent) is available to a user. By contrast, the 128GB Surface Pro has 83GB available to users, or 65 percent of the drive.

Microsoft has been a little slippery on the actual amount of space available on the slates. Just before the tablets went on sale, Redmond recanted its initial numbers and bumped up the available space on the 64GB Surface Pro to 29GB and on its bigger sibling to 89GB.

Microsoft’s miscalculation on the 128GB Surface Pro didn’t win them any kudos from discomfited Surface seekers on Reddit.

“We were first in line at the nearest Best Buy this morning and it seems that Microsoft only shipped enough devices to fulfill Best Buy’s pre-orders and one extra 64GB model,” lamented one Surface Pro 128GB shopper.

“There’s not a single 128 unspoken for in the country,” another wrote. “I don’t know how they could have grossly underestimated the demand like this.”

“All of the Best Buy stores in my area were only given one 128GB,” a disappointed Surface seeker noted. “The two Staples in my area that I went to weren’t even supplied with the 128GB. Microsoft has a large enough marketing and research company that they should know better.”

Microsoft isn’t used to having a hit product on the scale of an iPhone or iPad. If the Surface Pro is such a product, let’s hope it can show the Redmond faithful that it knows how to handle success and fill the pipeline with more Surface Pro 128s quickly.