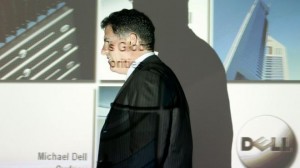 Dell has written to shareholders they are better off accepting a bid from Michael Dell and Silver Lake to acquire the company than holding on to their shares.

The company’s independent directors have unanimously agreed to recommend the transaction, it said Friday in a letter to stockholders.

“We are fully convinced that this significant, immediate and certain premium is superior to owning Dell as a stand-alone entity today – with or without a leveraged recapitalisation – as well as to the other strategic and financial alternatives potentially available,” the letter said. “We believe that the risks and uncertainty of a stand-alone public company are high, and that the transaction we have negotiated offers superior value for Dell stockholders.”

The board solicited rival bids from 21 strategic and 52 financial buyers, but no superior offer materialised, it said.

The Silver Lake bid “shifts very substantial risks to the buying group – risks that in any leveraged recapitalisation would be retained by the stockholders and considerably magnified by leverage,” the board said

That remark was aimed at rival bidders Carl Icahn and Southeastern Asset Management, who had proposed just such a leveraged recapitalization. The offer – which never became a formal bid – prompted Dell two weeks ago to issue a warning that Icahn’s plan would leave the firm short of cash. In an open letter on May 13, the board’s special committee asked Icahn for a draft of the definitive agreement concerning the proposed transaction, and for details of how he and Southeastern would finance it. The committee also asked who would run the company, and how Icahn could be sure sufficient stockholders would take payment in additional shares rather than cash.

In contrast, the Silver Lake bid of $13.65 per share represents a 25 percent premium over the price on the last trading day before news of the bid leaked, Friday’s letter said.

The company has now filed final definitive proxy materials with the SEC ahead of a July 18 special shareholders’ meeting to seek approval for the deal.