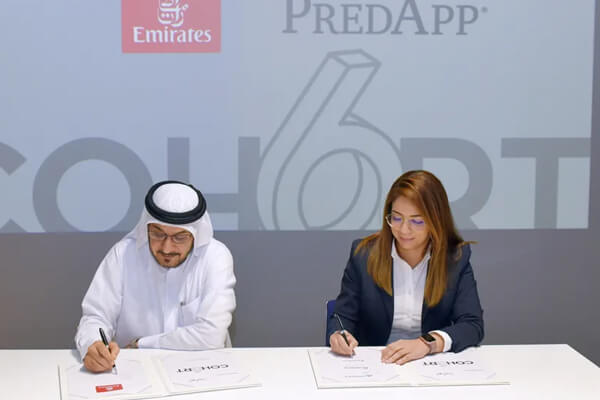 The project is among the three initiatives that the airline is working on after it signed MoUs with three tech firms from the sixth cohort of the Dubai Future Accelerators (DFA) programme.

The tech companies, hailing from the USA, Germany and the UK, were selected from the pool of seven participant teams that worked with Emirates through DFA for nine weeks between March and May 2019. The MoUs were signed by Adel Al Redha, Emirates’ Executive Vice President and Chief Operations Officer and by representatives from the shortlisted companies – Opinsta (UK), Predapp (Germany) and Verusen (USA).

The teams from Cohort 6 of the DFA programme worked with stakeholders from Emirates to map out requirements, refine their proposals and develop prototype solutions. Opinsta, Predapp and Verusen were chosen based on the fit of their proposed solutions, and broader application and scalability within Emirates.

Adel Al Redha, executive vice president and COO, Emirates, said, “Over the course of nine weeks, the interactions between the teams at Emirates as well as the participants of Cohort 6 of the Dubai Future Accelerators programme have resulted in a number of options we can explore to address the challenges we had defined. All the participating teams were actively engaged in the challenge and were able to gain considerable insights into the functioning of the world’s largest international airline in the areas outlined in the challenges. This by itself has sparked off a number of ideas for further innovation both within and outside of the aviation industry.

“Even though all the proposals were interesting, we signed MoUs with three shortlisted companies to explore their solutions in depth and evaluate the outcomes to provide our customers a better experience and implement more efficient process,” he added.

Khalfan Belhoul, CEO, Dubai Future Foundation, said, “What we are witnessing here is the advancement of the next wave in aviation innovation led by the UAE government by adopting and testing emerging technologies, and reiterating once again Dubai’s role in shaping the future of humanity.

“The MoUs signed today are the outcome of DFA’s offering of an ideal setting for Emirates, the world’s largest international airline, along with the brightest and most innovative minds, to work hand in hand in finding transformative solutions to key challenges in the aviation industry,” he added.

Verusen will be working on using Artificial Intelligence to support more agile procurement and supply chains for Emirates. Opinsta will be working on enhancing the internal processes and systems for crew duty travel and Predapp will work on developing an Emirates AI Assistant that will assist airline customers from pre-flight to post-flight.