Under the agreement, the value-added distributor will deliver Garland Technology’s first bypass test access point (TAP) to organisations in the Middle East and Africa. In addition, SCOPE ME will also provide enablement training and workshops on Garland’s technologies and act as a first contact and deliver tier-1 support to its channel community and customer base.

Garland Technology network TAPs are a purpose-built hardware device that provides physical access and visibility into your network – allowing users to see every bit, byte and packet.

Fadi Abu Ekab, Chief Executive Office at SCOPE Middle East, adds “We are pleased Garland Technology has trusted SCOPE ME to distribute their solution in MEA countries. With this manufacturer we cover the need of many security projects within complex corporate networks to divide traffic for analysis with security tools. Garland’s TAPs allow gathering of traffic in real time that is shared with the security and monitoring tools. Additionally, Garland TAPs fit well in our current portfolio.” 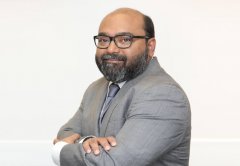