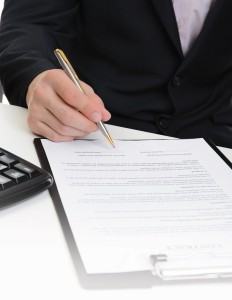 Whether you like it or not, contracts are a necessary and unavoidable part of doing business. When mistakes are made, it can significantly impact the business you do. Ben Rossi speaks to industry experts to find out how you can get the right contract for you.

Before going into the process of forming a solid contract, it is important to understand the difference between a contract and a service level agreement (SLA).

“A contract is defined as an agreement between two or more parties, especially one that is written and enforceable by law. This legal document outlines the services provided, duration, cost, resources, approach, assumptions, etc,” says Dani Mallouhi, service account management lead at eHDF (eHosting DataFort).

“An SLA would focus on the quality of services agreed on in the contract by setting service targets and measuring performance of the different service levels. SLAs clarify the responsibilities of both parties during service period and may include different elements of service deliveries, like service hours, incident handling, change requests, problem management, penalties, reports and escalations,” he adds.

Praveen Koovan, director of service delivery at Emitac Enterprise Solutions, breaks the definition of a contract down to “basically a sub set of an SLA.”

“It is formed on a particular service and does not emphasise the overall business objective. It does not look into the various metrics and performance objectives. An SLA is not just intended to fix problems between two parties, it is a mode to improve communications and define an approach to achieve business objectives and goals together,” Koovan says.

“An SLA is normally used as a measurement tool as part of the contract. Another reason for signing an SLA is that it could be revised or reviewed based on the requirement of the customer, eliminating the need and administrative burden of reviewing the contract frequently,” he adds.

Mallouhi is specifically involved with SLAs at eHDF. He provides insight into the process of forming an SLA, which he says can come in two forms.

Koovan says at Emitac they initially present a draft of the SLA which is then fine-tuned based on the business objectives the customer must meet. “After the scope of service is defined, the KPAs and metrics will be defined.  It would then be bound by a legal contract with the standard terms and conditions, description of the services, costs, penalty clauses and so on. Finally after multiple reviews, the SLA is agreed upon by both the parties,” he adds.

When it comes to forming a contract, Amir Sohrabi, regional alliance manager MEA at SAS, says it is mostly about ensuring standard aspects of a contract are included, but he also gives advice in forming more complex contracts.

“All contracts should include basic elements – including the clear offer, the acceptance of the offer on account of the terms presented and the ‘considerations’ for the agreement. More often than not, the latter part is the exchange of money in return for some sort of value or product, but can also be an exchange of benefits and obligations,” Sohrabi says.

“For more complex contracts that involve software and services, it is recommended to always sign written contracts stipulating the extent of each party’s rights and obligations, with a clear underlining of what will happen if obligations are not met,” he adds.

Vikram Suri, MD at Sage Software MEA, says it is important to consider the deliverance of the contract when forming it.

“We look at the technical and sales related business volumes and the potential for growth, and then measure the partner’s ability to perform under these areas. With business volume we look at new business and what the business partners can get for us. That is really the first step,” he says.

“We then write the contract internally with our finance group, and depending on how big the contract is we might take it to our group legal level and then make a commercial call on signing the contract,” Suri adds.

These different departments make up some of the team that contribute to a contract. Suri expands on this to give the full scope of who should be involved in forming a contract.

“There needs to be someone who understands the legal balance of what is mentioned in contracts – this is very essential. The person required to make a commercial call on the elements of the contract could be a manager of the business or manager of a department who understands the commercial obligations under that contract. The other people who should be part of this team would be the stakeholders from the different departments who directly or indirectly influence this contract,” he says.

In terms of SLAs, Koovan says these agreements cannot be formed with just the customer IT team.

Adhering to the contract

Once the contract or SLA is completed, the task is to then ensure they are adhered to. For contracts, Suri recommends comprehensive project reviews.

“For us contracts are actually used when we are discussing the project progress and therefore the review and discussion at the time of meeting milestones in the contract is very important in allowing us to do project reviews at later dates,” he says.

Koovan says the many KPAs – based on the business objectives – that comprise an SLA, link to performance metrics which allows a company to measure how well objectives are being achieved.

“Working on these, measuring them based on the incident and collecting relevant information allows us to fine tune the performance of the SLA,” he adds.

Making a mistake when forming a contract can prove extremely detrimental and pose serious implications for the business, so avoid overcomplicating it.

Koovan says pitfalls in forming SLAs often originate from enterprises failing to focus on the business objectives and to incorporate a proper scope and purpose.

“The challenge is to get proper information from the enterprises before an SLA is drafted. Internal communication between the customer and their business units should be clear and in sync.  They should work together to identify the existing problems and come out with an improvement plan to achieve the business objective,” Koovan says.

“That will solve most of the problems.  The initial discussions to scope the SLA should be jointly done with the system integrators, business team and the IT team of the customer,” he adds.

Challenges can also arise from the relevant laws that affect where or how business can be done in the region. Geographical and industry-specific regulations can often create restrictions in the delivery of contracts, and influence the way they are formed.

“A key challenge is to be aware of what we can and cannot do in terms of business for each country. Understanding this gives us the flexibility to create reasonable objectives to be stipulated in the contract, as regulations and political landscapes can change overnight. There are also industry-specific regulations we sometimes have to bear in mind – for example, Lebanese banks must observe strict confidentiality obligations,” Sohrabi says.

Sohrabi adds that the governments should make more of an effort in shaping the legal landscape to allow businesses to draw up better contracts that are more valuable for customers.

“The government can do more to pro-actively find out what businesses are working on, share relevant information with them and help encourage an environment of continual training and improvement. This would include the sharing of practices from other parts of the world, helping set up template contracts and helping train new recruits,” he says.